I was big into Ozzy in the early 90's, starting with his 1991 smash, No More Tears. From there, I worked my way backwards into his 1980's work, collecting all the albums up until that time. Ozzy was gearing up to be one of my all time favorite metal artists. Then, just as I was getting into it all, he announced he was retiring, went on a final set of tours and released the double Live and Loud album.

Then 1995 came, and a bored Ozzy suddenly reemerged with a new album, Ozzmosis. It was pretty bland in terms of what I had come to expect at this point, and pretty much signaled the end of my interest in anything further from him. Things didn't get better either. 2002 crept up on us, and suddenly the Osbourne family were "starring" in their own reality television show. Ozzy had moved from aging, failing metal artist (in my mind), to TV personality. A gimmick. A novelty act. A joke. 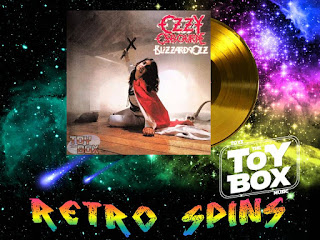 While he hadn't been someone I was steadily listening to at this point, it was still such a shame to see him envelop a household name persona when his prior musical works promoted anything but this. Old Ozzy was not as cool as young Ozzy. Old Ozzy...was kind of pathetic.

With no hope for a future from Ozzy in my musical library, I've found myself going back in time to his better, more creative works. Songs which were thought out, crafted meticulously to perfection, and not just released because old Ozzy was bored one day walking around his mansion. Albums such as his studio solo debut, Blizzard Of Ozz.

My friends, back in 1980, you didn't dare play Blizzard Of Ozz in front of your momma and papa. You didn't talk about it at church. You didn't ask your teacher what her favorite track was. No sir. Ozzy was the devil in most eyes of your average adult. A singer who promoted anarchy, violence and even suicide - Depending on who you asked. His music was raw, powerful and amazing! Especially with the backing of Randy Rhodes!

Blizzard Of Ozz says, "I Don't Know" to any questions you may have before throwing you on a "Crazy Train." It delivers hard with Suicide Solution, Mr. Crowley, No Bone Movies, Revelation and Steel Away The Night, while also showing Ozzy has a caring side in Goodbye To Romance. Randy Rhodes wails in the background on lead electric to every song, and then he too takes a step back to present his short masterpiece, Dee, as if to say, "It doesn't have to be all about metal."

The album is a perfect masterpiece in my eyes. It's solid from start to finish, showcasing Ozzy at his best. No, he don't need no f&^#ing Black Sabbath!

Click "HERE" to go back to the home page. For more posts related to this one, please click the labels below.
Posted by The Toy Box on May 11, 2021
Email ThisBlogThis!Share to TwitterShare to FacebookShare to Pinterest
Labels: 1980, 80's Album Review, 80's Music, 80's Music Review, Blizzard Of Ozz, Music of the 80's, Ozzy Osbourne, Retro Spins
Newer Post Older Post Home