Even though the term "boy band" didn't exist until the 90's, New Edition is often credited with starting the trend. This is odd as all males / young boy groups are noted as being around since the 50's. I mean, come on, if anything The Jackson 5 would constitute as a boy band, and they were around in the 70's.

New Edition is rooted in music history not only for the group itself, but for the solo and future groups which would come from it. Bobby Brown was voted out in 1985, but in the process went on to develop a successful solo career. This left the door open for Johnny Gill, who was voted into the group in 1987, but who also went off in a solo direction by 1990. In fact, by this point in time, the entire group was looking into other projects as a result of Bobby Brown's solo success.

Members Ricky Bell, Michael Bivins and Ronnie DeVoe would create the group Bell Biv DeVoe, and go on to further success with their 1990 hit album, Poison. Watching on the sideline of all this success, both for those who ventured out into solo careers and those in groups was the final member of New Edition, Ralph Tresvant. Though he released a solo album in 1990, it was not as successful as the other members. 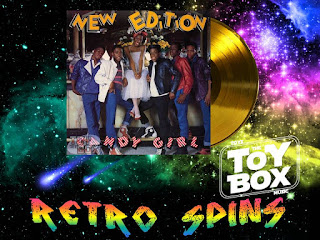 With all of that said, today's Retro Spin takes me to 1983's debut album of New Edition, Candy Girl. While it tries to come across as sweet, bubblegum pop / light R&B, the fact of the matter was it was more so disturbing. Maybe it's just me, but I don't tend to enjoy a bunch of little boys singing about girls and love - a theme which carries across every single song. It's awkward and out of place. Fine, call me a square, but that's where I stand on it.

"How could you leave when I need you baby," sing the kids in the track, Ooh Baby. Leave for what? School? Home? Where do most thirteen to fifteen year old girls go? Certainly they aren't living together at such a young age.

This is what I'm talking about. The songs don't match the group. Don't get me wrong, I don't want to hear a bunch of songs about stickers and crayons, but come on. Let's not go to the opposite spectrum to the point it gets weird.

The end result here was that I didn't like this album. The song Candy Girl was iconic for it's 80's nostalgia as a hit, but beyond that, it was just too many love songs from kids who hopefully didn't know about the inner workings of love at that age.

In retrospect, I suppose this is no different from the kinds of tunes the Jackson 5 were singing. As such, I don't know why I'm so beside myself with this album, but oddly fine with the work of the Jackson's.

Click "HERE" to go back to the home page. For more posts related to this one, please click the labels below.
Posted by The Toy Box on May 04, 2021
Email ThisBlogThis!Share to TwitterShare to FacebookShare to Pinterest
Labels: 1983, 80's Album Review, 80's Music, 80's Music Review, Candy Girl, Music of the 80's, New Edition, Retro Spins