In the height of Image Comics popularity, several independent publishing companies were on the rise. Caught up in the middle of it was a seemingly forgotten publisher known as Black-Out Comics. There is so little known about the company that even Google searches turn up little to no history. The publisher appears to have surfaced in 1995. However, by 1998 either went out of business, or was sold to a an unknown buyer who has done nothing with the properties they acquired - The latter being nothing more than an alternative perspective of pure speculation.
Though there were some male heroes, Black-Out Comics main focal point of books was on busty women heroines. The main "franchises" consisted of Hari Kari and Lady Vampire. However, there were also a handful of other titles, which included, Bad Girls, Violet, High Voltage, Jugular, Ms. Cyanide & Ice, Outbreed 999 and Tormentress. These latter series consisted of anywhere from one to two issues. 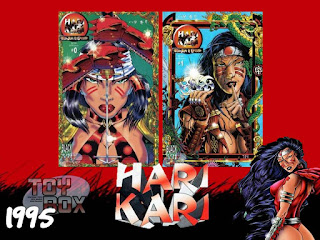 Hari Kari began her comic book adventures in 1995 with issues number zero and one. I suppose it's worth mentioning that this particular era in comic books was also big on gimmicks to sell books. This included publishing a lot of titles with the number zero. 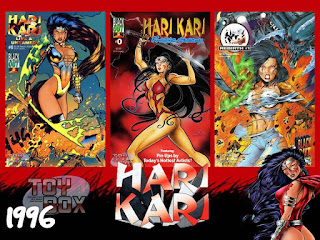 This trend continued in 1996 with several subtitled series which bounced back and forth between number one and zero. These included, Live & Untamed, Private Gallery, Rebirth, The Beginning and The Silence Of Evil. 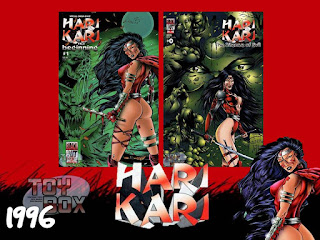 Because I don't own any of these issues, none of them in the Hari Kari series to be exact, I honestly have no clue if or how they tie into each other. Additionally, I also don't know what order they should be read in - If that even matters. 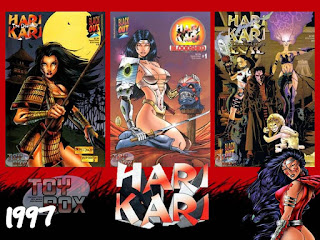 With six issues being released in 1997, I have to believe that someone was reading these stories. There had to be an audience somewhere to warrant the continued publication. 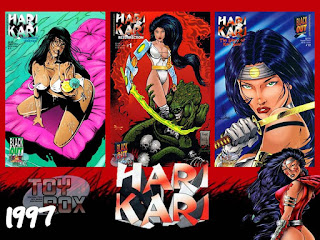 1997 saw the continuation in the trend of multiple titles, once again flip flopping between number zero and one. These included, The Death Of Hari Kari, Bloodshed, Possessed By Evil, Sexy Summer Rampage, Resurrection and The Diary Of Kari Sun. 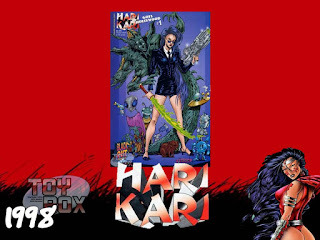 Whatever popularity the character and / or her titles had in 1996 / 1997, that ended abruptly in 1998 with that last issue released, Hari Kari Goes Hollywood. As I stated above, the company disappeared without a trace from that point.

It's worth noting that, since this was during the time frame of the Image Comics boom, that some of the issues do have variant covers. The most notable being a Jaws poster homage used for The Death Of Hari Kari issue. However, because the comics are relatively forgotten, they don't tend to sell for much, regardless of whether or not it's a variant or newsstand edition. If you pay more than two bucks per issue, you're overpaying. Further, two bucks is being generous.

Prior to shuttering, Black-Out Comics also took a page from McFarlane, and tried their hand at creating action figures. These two were based on the Hari Kari figure, and appear to be the only ones the company released. 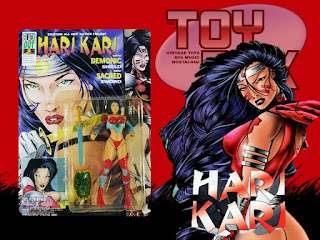 No, I didn't make a mistake and post these photos twice. There is a difference between these two figures. However, the only way to see it on the package is to read the blurb in the white box at the top left of the package.

The top photo is the original version of the figure, while the bottom is a "nude variant". Yes, that's right. You could buy a version of this figure with a removable chest plate. While I almost posted the picture of the figure with the top removed, I ultimately decided to keep the site family friendly. However, you really have to see this thing to understand just how badly it was done. Let's just say Barbie dolls without their clothing look more natural than this abomination. It's really bad. I see no draw to this whatsoever beyond it being a bit taboo in the world of toy collecting in 1998. 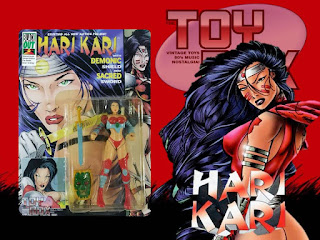 Much like the comics, you can get the figures for as little as two dollars a piece. However, I have seen them sell for as much as twelve, which is quite frankly baffling. But, to each his or her own.

Click "HERE" to go back to the home page. For more posts related to this one, please click the labels below.
Posted by The Toy Box on May 17, 2021
Email ThisBlogThis!Share to TwitterShare to FacebookShare to Pinterest
Labels: 1990's, Black-Out Comics, Hari Kari