I was never a fan of Bananarama in the 80's. Not even of the highly popular Cruel Summer, which appeared in one of my favorite childhood movies, The Karate Kid. However, as the years have passed, I've come to find myself appreciating not only their hits - Which for me constitutes as three songs; Cruel Summer, Venus and I Heard A Rumour. I'm sure there are more, but I don't know them.

Which brings me to today's Retro Spin. 1984's self titled album from the trio, Bananarama. 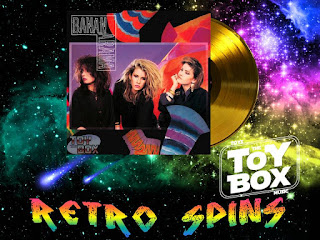 Depending on the version you purchase, you'll either get nine tracks (UK) or ten (US). Purchase wise, I got the UK edition, because for the life of me I couldn't find the original US version. Not only that, but I had to order it from a UK seller to boot. Okay, that part probably makes sense. In general, first pressings of 80's Bananarama albums seems a little difficult to come by - With the exception of 1987's Wow!.

As I fired up the album, I was treated to the sounds of Cruel Summer, which set a nice tone for where things would be going. The album doesn't deliver what I would constitute as "bad" songs. However, it also doesn't deliver much in the wow factor either. The biggest problem I have with it, overall, is that it's quite honestly forgettable. Even as I sit here listening to it, I couldn't tell you much about any of the tracks beyond the "hits", Cruel Summer and Robert De Niro's Waiting. Mind you, I don't even like the latter track.

I'm disappointed in how little the album offers, especially considering the amount of effort I put into finding it. Not to mention the sixteen days it took to get it in the mail. I do have two other albums from Bananarama which I'll get around to, but at this point, I'm ready to move onto something else in hopes of getting a little more bang for my buck. This album did not impress.

Click "HERE" to go back to the home page. For more posts related to this one, please click the labels below.
Posted by The Toy Box on May 25, 2021
Email ThisBlogThis!Share to TwitterShare to FacebookShare to Pinterest
Labels: 1984, 80's Album Review, 80's Music, 80's Music Review, Bananarama, Music of the 80's, Retro Spins