If you enjoyed last week's post of the Marvel Age Comic Spectaculars from Golden Records, then you may enjoy this extension, of sorts, featuring Batman and Superman.

Rather than produce direct one to one reprints of comics, cover and all, DC Comics and Golden Records worked together to create wonderful box sets which featured unique, albeit reprinted books, with all new covers and a slew of extras. 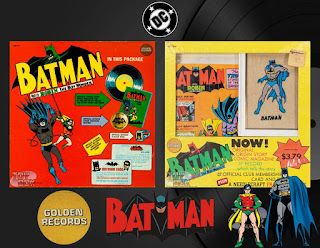 The Batman box included the reprinted stories, "The Origin of Batman and Robin" and "The Joker's Utility Belt". The book contained an additional two pages showcasing "Batman and Robin History". The set also came with a flasher ring, an "Official Batman Club" membership card, a one-inch Batman logo club membership pin and a record. 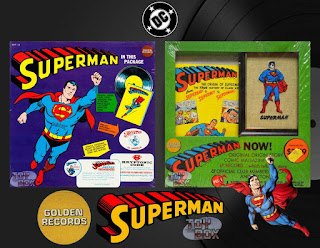 The Superman box included the reprinted stories, "The True History of Superbaby, Superboy and Superman" and "Superman's Mystery Powers". The book contained an additional two pages showcasing "Superman History". The set also came with an iron on oval patch, a "Supermen of America" membership card, a club membership pin and a record. 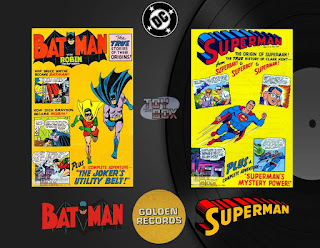 The above image is a closer look at the unique covered comic books inside each set. Meanwhile, below is a unique 45 rpm record from Golden Records featuring the Batman and Superman songs. The Batman song is the theme to the television show. Meanwhile, the Superman song is a little jingle credited to The Golden Orchestra. The tune essentially takes and repeats the "mantra" of Superman - "Up in the Sky, it's a bird it's a plane. Able to leap tall buildings in a single bound, etc." 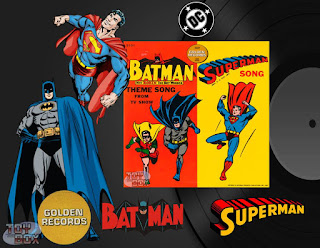 Unlike the Marvel Comics versions, which will easily cost you over a thousand dollars each, these DC iterations are more "reasonably" valued at around $500.00 to $600.00. Not the quotation marks on "reasonably". Definitely a relative term.

Click "HERE" to go back to the home page. For more posts related to this one, please click the labels below.
Posted by The Toy Box on May 31, 2021
Email ThisBlogThis!Share to TwitterShare to FacebookShare to Pinterest
Labels: 1960's, Batman, Boxed Club Sets, DC Comics, Golden Records, Superman