I don't know what it is about Kiss that they keep ending up on my radar. It's certainly not the music, because I not only have never heard the majority of their music, but the stuff I have, I don't necessarily like. Yet oddly they continue to pull me towards them.

When BMG and Columbia House were a thing back in my high school years, I tried (unsuccessfully) to get every single Kiss album from them. It was one of those "Sign your friends up and get four CD's free," things. For whatever reason, the CD's never came though.

Decades passed, and I was well into amassing my massive CD collection, and things came full circle. One day, I had to have Kiss albums. At first, I started by grabbing only the albums which had songs that I wanted. I think there was five or six albums in this group. Then things went bad. Suddenly, I needed ALL of them. Very quickly, I was the owner of twenty studio albums, four solo albums and three live albums. Most of which to this day I haven't listened to. 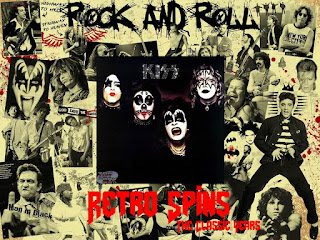 Well, what better time then now? Let's start with their debut. The self titled, 1974 released, Kiss.

It's got rock. It's got roll. It starts out with Strutter, and it's a pretty solid album. I mean, I don't hate it. If anything, it only stood out to prove my theory correctly that the true talent of the band was actually Ace Frehley and Peter Criss. Sure, Paul Stanley is a good singer, and Gene Simmons a decent bass player, but the other two work magic around their instruments. This is so apparent in tracks Cold Gin, which showcase Frehley on guitar, and Kissin' Time which gives Criss an opportunity to show his drumming skills. To be honest,they're actually the only reason these otherwise lame songs turned out to be good. It certainly wasn't the lyrics or bass.

As for the rest of the album, it's great to hear the foundation the would become the legacy of Kiss. However, this is not the album that makes me a fan - Nor do I know if one even exists that will. I guess I'll find out.

Disclaimer: They Toy Box does not endorse or contribute to piracy. Retro Spins posts are intended for educational and entertainment purposes only. None of the music discussed here is available for sale, downloading or distribution.
Posted by The Toy Box on May 05, 2021
Email ThisBlogThis!Share to TwitterShare to FacebookShare to Pinterest
Labels: 1974, 70's Album Review, 70's Music, 70's Music Review, Kiss, Music of the 70's, Retro Spins