My extensive knowledge of ZZ Top begins and ends with a mild knowledge of their hits from the 80's, their appearance in Back to the Future Part III and a dislike for their classics from the 70's. Oh boy...This should be fun. 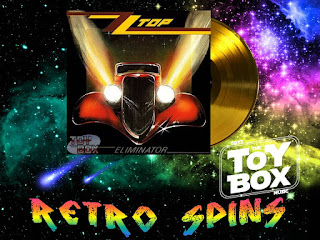 It actually took me a few start and stop sessions to make it through this CD. Not because I wasn't interested in hearing it, but rather, because something kept coming up. As such, I don't know whether or not I would have enjoyed it more had I gone from start to finish in one session or not. I suppose I could have restarted it and tried it that way. However, truth be told, I wasn't really enjoying it all that much.

Instrumental wise, I won't deny there is a lot of talent behind in the fingers and hands of ZZ Top. Their guitar riffs are occasionally quite impressive, but at the same time, aren't enough to keep me interested enough in each song. I dare say for me, ZZ Top is what Rush was to a buddy of mine. He would get into the songs as the music started, but as soon as the singing began, he lost interest. That's kind of where I am with them.

The album gets plus points for having three staples of the 80's in tracks Gimme All Your Lovin', Sharp Dressed Man and Legs, and for that alone I say the album is worth while. Despite the band not being my favorite, these are still great songs. Beyond that, I didn't hear anything else which really grabbed my attention. In fact, by the half way point, I really just wanted it to end.

Stand out oddity on Eliminator was hands down TV Dinners. I'm not sure what possessed the band to write a four minute song about frozen dinners and their love for them, but this was certainly out in left field in the realm of "Weird Al" Yankovic territory. I'm seriously still shaking my head from this one.

Overall, the album just wasn't for me. ZZ Top and I will have to suffice for being casual 80's acquaintances. I have zero interest in tracking down anymore of their albums.

Click "HERE" to go back to the home page. For more posts related to this one, please click the labels below.
Posted by The Toy Box on February 02, 2021
Email ThisBlogThis!Share to TwitterShare to FacebookShare to Pinterest
Labels: 1983, Eliminator, ZZ Top