Permanent Waves was the very first Rush album I ever purchased, and it was completely by accident.  I had gone to the record store with a Rush song in my head, but didn't know what it was - It was Nobody's Hero, for the record. The store clerk tried his best to help me, but couldn't figure out the song. He pulled out a copy of this particular album and said, "A lot of people like this one, if you want to get into Rush. The song may be on there." A crap shoot, and one, that while it didn't have the song I was looking for on it, busted a door wide open for me into the world of Rush. 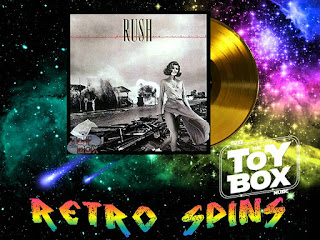 The album throttles into high gear with its opening track, The Spirit Of Radio, which grabs you by the arm and shouts, "Come with me!" As you run down the high adrenaline street with the track, you're greeted by Freewill - An anthem for those who choose to make their own decisions as opposed to follow.

From there, for those new to Rush as I was back in the day, you're treated to your first real taste of what the band stands for - Epic jam sessions spreading across seven to twelve minutes with lyrics which don't necessarily make sense to the average listener, but riffs and deep instrumentation which keeps you hooked. This comes in the form of Jacob's Ladder.

The album then drops you into two more radio friendly tracks in the delivery of Entre Nous and Different Strings. Granted, they still have that undertone of confusion that is accustomed to most Rush lyrical arrangements.

As a final sendoff, the album delivers the ten minute masterpiece, Natural Science. It was with this track that I actually first took notice of the drumming of Neil Peart. As an aspiring drummer back in those days, his beats and style hooked me big time.

These days, the album hasn't lost its luster for me. It's still one of my all time favorites from the band, and one I enjoy listening to it frequently. For me, it's second only to that of their 1993 album, Counterparts - The album which ironically has the song Nobody's Hero, AKA the album which I initially wanted all those years ago when I first got this particular CD.

Click "HERE" to go back to the home page. For more posts related to this one, please click the labels below.
Posted by The Toy Box on February 09, 2021
Email ThisBlogThis!Share to TwitterShare to FacebookShare to Pinterest
Labels: 1980, 80's Album Review, 80's Music, 80's Music Review, Music of the 80's, Permanent Waves, Retro Spins, Rush