It wasn't her first studio album, but Pat Benatar's first entry into the 80's, Crimes Of Passion, solidified her as a female rocker force to be reckoned with. Her compilation album, Best Shots, was a regular for me, dating all the way back to its original cassette release in 1987. However, I never really took the time to broaden my horizons with her beyond that.

Fast forward to September 2017. I'm big time into buying CD's at this point, building what would become my massive 80's collection. The mood suddenly hits me. I need Pat Benatar. It must have been the perfect time for this decision because I stumbled across a listing on ebay which had all but two of her studio albums (1997's Innamorata and 2003's Go). This didn't really matter much to me because all the ones I did want were present and accounted for. Best of all, it was really cheap for what I was getting. A quick buy it now, and my Pat Benatar collection was complete.

So now we step even further into the future - January 2019. This is when I finally get around to spinning my first album for her - The one I'm writing about today. 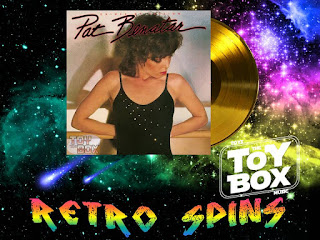 Crimes Of Passion is packed full of her hits, such as, Treat Me Right, Hit Me With Your Best Shot, Hell Is For Children and (to an extent) Wuthering Heights. But how does the rest of the album stand up? Does it pack as big a punch as the hits? Are the hits the hits for a reason? What's on the disc?

Little Paradise, I'm Gonna Follow You stood out as solid tracks, but not as refined, so to speak, as the above mentioned hits. I wonder if this was because I've heard the hits so much that's its hard not to hold anything else to such a high level of expectation.

Overall, enjoying six out of ten tracks for a fairly good album in my book. I definitely heard some great tracks which made it to my 80's mixes on the ol' iTunes and iPod. I'm looking forward to hearing some more from Pat Benatar in the near future.

Click "HERE" to go back to the home page. For more posts related to this one, please click the labels below.
Posted by The Toy Box on February 23, 2021
Email ThisBlogThis!Share to TwitterShare to FacebookShare to Pinterest
Labels: 1980, 80's Album Review, 80's Music, 80's Music Review, Crimes Of Passion, Music of the 80's, Pat Benatar, Retro Spins