Retro Spins: Pink Floyd - The Piper at the Gates of Dawn

As I continue to listen to the music of the late sixties, I can't help but think that Elvis Presley was on to something. This music is weird. Don't get me wrong, I'm sure if you're blitzed out of your mind on some form of conscious altering medicinal that the music makes perfect sense. However, for those of us not riding white dragons, it's just odd.

What I think is really interesting about this particular era of music is how influential Indian music is. You hear a lot of sitars and in general a very Hindu style intertwined with the psychedelic sounds. Pink Floyd captures this perfectly, if you could call it perfect, in their debut album, The Piper At The Gates Of Dawn.

My exposure thus far to the band has been to their album, The Wall, which I think everyone should listen to at least once, and a slight dabble in their album The Dark Side Of The Moon. Essentially, their two most popular recordings.

Though all of the members of Pink Floyd were crucial in their success, original guitarist, Syd Barrett, may have been the driving force of the band during its early years. Barrett not only developed the sound of the band, but was also the major contributing writer of all of their material. Sadly, the guitarist / vocalist had a deeper issue, one which would see the decline of his mental health over the course of 1965 - 1968. This would lead to issues with other band members, and the decision was made to let him go. Unfortunately, this also resulted in the band being fired from their label, who felt Barrett was the creative talent among them. The label retained Barrett, who sporadically continued on with a solo career until 1972. However, his declining mental health ultimately led to him stepping out of the spotlight. Despite this, the band ensured he continued to receive royalties for his work up until his death in 2006.

As for the remaining members, and the band itself, Pink Floyd is regarded as one of the most influential group of the 60's and 70's, helping to shape the era known these days as Classic Rock. In 1996, David Gilmour, Nick Mason, Rick Wright, Roger Waters and even Syd Barrett, as Pink Floyd, were inducted into the Rock And Roll Hall Of Fame. Interestingly, neither Roger Waters nor Syd Barrett attended the ceremony. 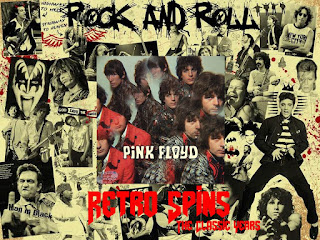 Listening to A Piper At The Gates Of Dawn, I immediately could tell this was going to be on par with the sounds of the era, odd lyrics and all, such as:

Lazing in the foggy dew
Sitting on a unicorn
No fair, you can't hear me
But I can you

Yeah, true lyrics to the song, Flaming. In hindsight, it's so cliche to the 60's. It's the kind of words that would be used in a Dewy Cox song. Knowing the history of Syd Barrett, it also paints a clear picture of a man who was on the edge of a mental collapse.

The album was both intriguing and unimpressive at the same time. Some songs really sucked me in, while others I shrugged off as your typical fare of the era. I did enjoy it enough that I felt it was an album I would want to add to my collection, but not necessarily as any sort of priority. So instead, I purchased an original pressing of Culture Club's Kissing To Be Clever, to replace my remastered edition. Still, I enjoyed it enough that I wouldn't mind hearing more from the band.

Posted by The Toy Box on February 17, 2021
Email ThisBlogThis!Share to TwitterShare to FacebookShare to Pinterest
Labels: 1967, 60's Album Review, 60's Music, 60's Music Review, Music of the 60's, Pink Floyd, Retro Spins, The The Piper At The Gates Of Dawn