You know how you feel when you have to go to your kid's recital at school? You know they're doing the best they can, but class act rock stars they are not - Nor would you be there if they weren't your own child. Chances are, you're cringing every minute of the show, checking your watch waiting for it to end. 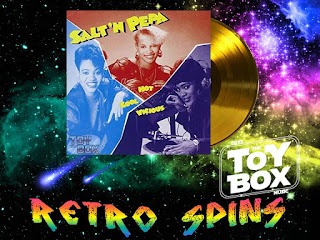 That's how this album felt. Salt 'N Pepa may have been one of the first all girl rap groups, but good, they are not.

Being fair, rap is not my number one music style of choice. I've only recently started getting into 80's rap albums, so my knowledge of them is also very limited. However, I know what I like, and I know what I don't like. This, I definitely don't like. The beats are weak, the rhymes are lame and the excitement just wasn't there. Honestly, it was more annoying than anything.

The only saving grace to this albums massive thud it makes is the first track, Push It, which is not only the song I bought it for, but  I don't feel so bad that this is the only track I liked from it because it's also the only song which charted from the album. Clearly I'm not alone in my dislike for Hot Cool Vicious. To add more irony to the mix, Push It wasn't even originally included on the first pressings of the album. It wasn't until the re-release in 1987 that it was added.

Oh well. Overall, I'll file this one under, "No thanks."

Click "HERE" to go back to the home page. For more posts related to this one, please click the labels below.
Posted by The Toy Box on February 16, 2021
Email ThisBlogThis!Share to TwitterShare to FacebookShare to Pinterest
Labels: 1986, 80's Album Review, 80's Music, 80's Music Review, Hot Cool Vicious, Music of the 80's, Retro Spins, Salt 'N Pepa