Retro Spins: The Jimi Hendrix Experience - Are You Experienced

As the guitar riff for the opening to Purple Haze fired things up, I could feel a sense of energy. I had heard this song countless times before, but as I looked to hear the whole album from start to finish, things felt very different. Perhaps it was because I was delving deep into artists of the past, and as such, was hearing an evolution of music that perhaps I hadn't noticed before. Maybe it was because it was hot on the heals of my last Retro Spin of Elvis Presley that this evolution was all the more prevalent. Whatever it was, The Jimi Hendrix Experience had power behind it that was making me take notice. 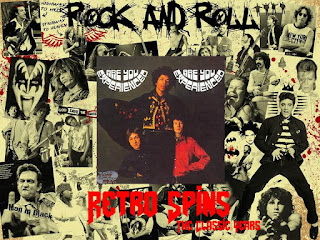 Now before I go any further, it's worth noting, and something similar to what I failed to mention on my review of The Rolling Stones debut album, is that there are two versions of this particular album. The original UK release features not only a different cover, but the tracks between it and the US version are very different.

For example, the UK edition doesn't contain the tracks, Purple Haze, Hey Joe and The Wind Cries Mary. Meanwhile, the US edition doesn't contain the tracks, Red House, Can You See Me, This May Be Love and Remember. I don't know what the reasoning is behind the two different versions of the album, but it's a common occurrence with albums from this era. Especially during the earlier years of the artists. Especially as it pertains to UK artists who release albums in the US either consecutively or later in their careers. It's kind of annoying. I shouldn't have to buy two albums to get the full experience, no pun intended.

The album cover shown above is the UK version, while the one below is the US released version. In comparing the full track listing on each album, I think the UK definitely got the short end of the stick, missing out on several of Hendrix's more popular songs. 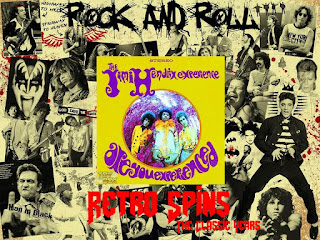 I have to be honest. I made it to about track six of this album, and it started to feel like a wall of noise. This baffled me, as I was really into it at first. I dare say that Manic Depression is my new favorite song from Hendrix, a song I had never heard until today. But it just kept getting louder and louder as the album progressed, actually giving me a bit of a headache. Mind you, this wasn't a volume issue either. I keep my music relatively low in that regard.

Ultimately, the take away from this was that there were definitely good tracks to be found on the debut album of The Jimi Hendrix Experience, but for me, it wore thin. No, not wore thin. Perhaps, became overwhelming, is a better explanation.

There's no denying that Jimi Hendrix was an amazing musician, but I don't think I'll be personally calling myself a fan. I actually got about half way through fire, AKA, track eight of eleven before saying to myself, "I just don't think I want to hear anymore." I then popped two Advil.