Born a poor child, proclaimed the King of Rock 'n Roll, Elvis Presley was a legend. Fun fact. I was born the exact day and year he died. With minimal knowledge beyond that, I felt it appropriate as I take a step back in time for this series of Retro Spins, The Classic Years, to listen to his debut album.

Though he was one of the hottest recording artists of his time, it's been reported that Elvis never wrote not even one of the lyrics he sang, despite being credited as a writer on about fifty percent of his six hundred recorded songs. The reason for this was that his contract required that writers give up 50% of writing credit to him before he would record their songs.

Though he was at the top of his notoriety between 1956 and 1965, with the hippy movement, psychedelia and the inevitable Vietnam War, Presley soon found himself as one of the least desirable acts in town. If the facts purported in the film, Elvis Meets Nixon (1997), not to be confused with the 2016 remake, Elvis & Nixon, are true, Elvis , who once couldn't leave his house at all, could now freely walk down the street being relatively unrecognized.

A true patriot, Elvis wasn't shy of speaking his mind on bands like The Beatles, calling them, "A real force for anti-American spirit". Being someone who never endorsed drugs, Elvis also became a US drug enforcement agent, courtesy of President Nixon himself.

Despite his decline in popularity, Elvis would not remain down for the count. His special, "Elvis", now refereed to as "The Comeback Special", rekindled public interest and a renewed sense of energy, Presley embarked on a tour which would only serve to solidify his status as The King.

Sure, I could go into from here how Elvis then got fat and died on a toilet, which I guess I just did, but instead, I'd rather switch over to his debut album. 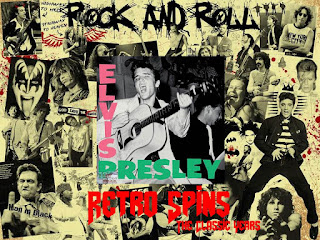 I have never heard this particular record, nor do I really know many of the songs from it. However, in that old fashioned sense of jukeboxes and malt shops, I found myself transported back to what I want to believe was a better time for America. A time of wholesome entertainment. A time where little Johnny and his sister Suzie played hopscotch on the sidewalk, and rode their bikes to town without a care. Where the milkman still came to your door and television was still in its infancy.

Where a nation was shocked as a man took the stage and gyrated his hips towards an unsuspecting audience when he debuted on the Milton Berle Show on June 5, 1956. History was being made and the world started to change. It's funny, for how much Elvis despised the hippy generation, he seemed to never really understand that he himself contributed greatly to this revolution.

Of the songs I heard, I admittedly only recognized Blue Suede Shoes, Tutti Frutti and Blue Moon. However, with that said, I didn't hate everything else. Like I said, the music somewhat transported me back in time, and it was nice to visit the era - Albeit if only based on the visualization I think would be associated with that point in time, based of course on movies and television. With that said, I wouldn't hate hearing more from this era, be it Elvis or other artists. I'm definitely going to have to look into this more.