Cases of wave three are showing up in the mail and locally at select Walgreeens. I say "select", because as we all know, finding these at retail stores is often futile. Ugh...I hope none of these ever become exclusive to that store. You think Target is bad? 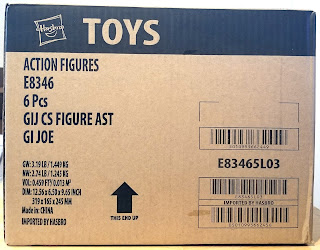 Six figures are packed to each case, and inside you'll find (2) Zartan, (2) Cobra Infantry, (1) Scarlet (Repaint) and (1) Roadblock (Repaint). As I've mentioned in a prior post, it's interesting even though Hasbro is releasing refreshed wave one cases, that as of now, this is the only case that you will find the repaints of Scarlet and Roadblock. I'm sure this will change at some point down the road. 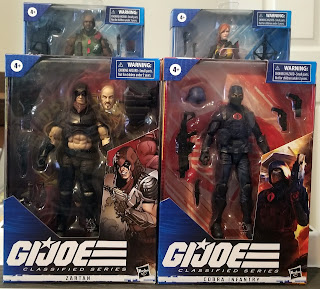 While my figures arrived neatly packed within the case, I actually only ordered one of each. Sorry to my fellow collectors, I don't currently have any extras to share. Having the box is certainly a bonus, as it gives me somewhere to store all my empty figure packs...Which for some reason I am holding on to. I should just throw these away.

Until I break down and do so, let's dive into the figures, going in numeric order.

First up is the repainted Roadblock (01). Since there's nothing new going on with the package, I'll cut to the chase and just show you a quick shot of the figure within. 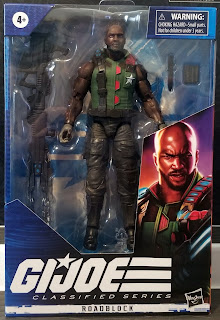 At this point, I think many collectors are a bit sick of Roadblock. Or maybe I'm just wanting to project my own opinion out on the world. But yeah, I'm definitely over this character.

In general, I'm not a fan of repaints. Playmates did this with the Nickelodeon Teenage Mutant Ninja Turtles line, and completely killed it in the process. I just don't see the point.

We all know that these figures are hard to find. So just release more. The only thing ushering out repaints does is start the craze all over again for 100% fanatics that need EVERY figure, and there are a lot of us out there. This is not helping the problem of distribution.

Maybe that's their plan. Get suckers to buy the same figure twice, three times or more. I mean, I did.

I know it's not the best side by side comparison, but here are the two figures together. The original on the left, and the repaint on the right. 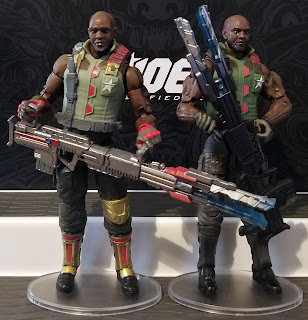 Which leads us into the repaint of Scarlet (05).

She rounds out the repaints of wave one with the above noted Roadblock and the prior posted Duke and Snake Eyes. That is until Destro gets a repaint. He's already got a circle head variant. 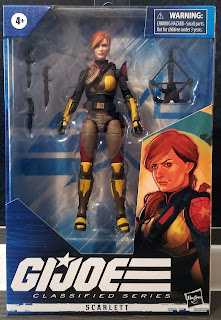 It's difficult for me to say which one is my favorite here. In a side by side comparison of the original (left) compared to the repaint (right), I really don't see enough change to make me sway one way or the other. 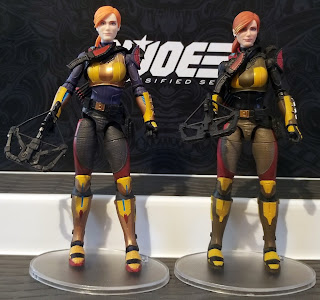 With repaints out of the way, let's jump to figure number twenty-three in the series. The highly anticipated, Zartan!

Zartan was actually one of those figures that fans thought was coming out last year. With each new wave that was announced, you know, wave two and wave one of the Cobra Island Figures, many thought he was going to be among them. Alas, he was not. But he's here now, and I suppose that's what counts.

Eagle eyed fans will notice that the artwork behind Zartan is also Dreadnok specific. That's a nice added touch, and stays in line with how the vintage packaging always differentiated the band of punks from your standard Cobra team member. Hasbro's distribution may stink, but their attention to detail has always been top tier. 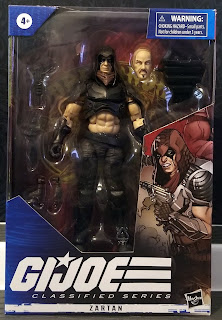 I also want to take a moment, and draw your attention to the card back. It's been updated to incorporate some of the new faces. 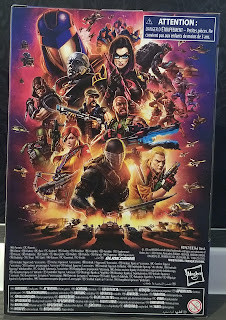 Now present are Beach Head, Zartan, a couple Cobra Vipers and Firefly. Looking at the package, I also can't help but focus in on those ever present Cobra Flight Pods (Trouble Bubbles). That was my all time favorite mini vehicle from the vintage line, and I so want them to make these for the six inch series. 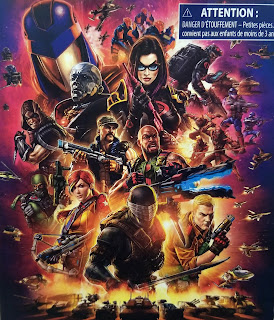 Beyond that, there's nothing much more to note about the packaging. 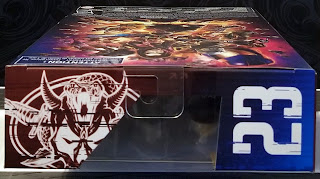 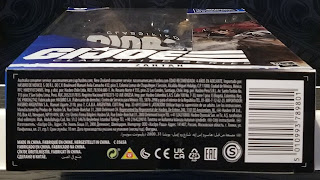 Zartan comes with some nice accessories that pay homage to the vintage 1984 figure. Though I will admit that the monkey's paw and severed snake head are very out of place. These are accessories that feel like they would be more so in line with Crystal Ball.

I especially like that the backpack splits in two to put the false face inside, another nice touch transferred over from the vintage figure. Interestingly, the vintage versions face does have a bit more detail, but this larger six inch scale one isn't terrible. If nothing else, it's fun. 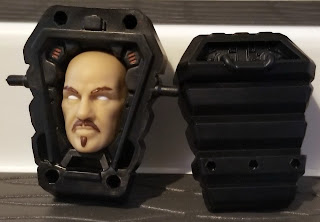 I had, and I suppose I still do have some mixed feelings about the figure. It's a great representation of Zartan, but when I look at it, something just feels like it's missing. Worst of all, I can't put my finger on it. Something feels off, and I don't know what it is. 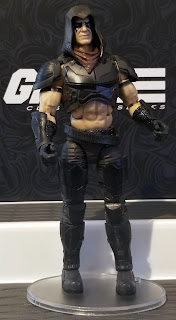 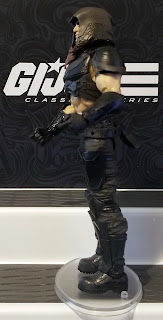 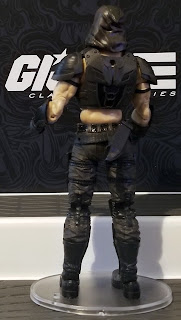 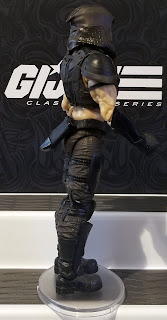 While I continue to ponder that, I will add to my thoughts what all of these pegs and holes in the backpack are for. Were several more accessories intended to be packed in? Are these just optional slots for placing his current accessories on? What's the deal? It's driving my OCD mad! 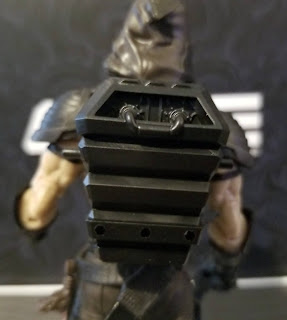 It appears I have a lot to think about with this figure. Until I sort this all out, here's Zartan all decked out. 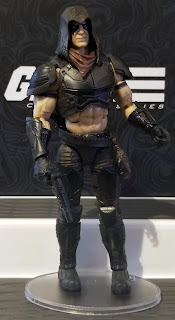 Last up in wave three is a figure that quite honestly just annoys me. 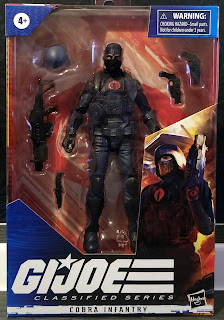 I hate this figure. I hate it for so many reasons. Before I launch fully into that, let's first whirl around the package. 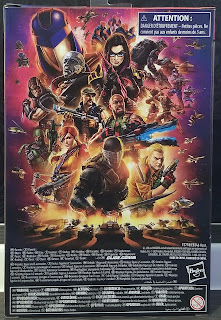 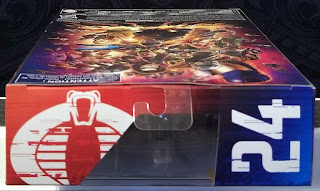 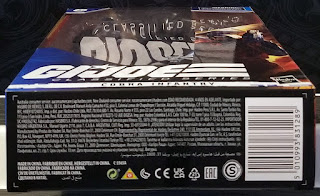 Alright, let's take the gloves off.

...This is lazy! How are you going to slap a new name and number on the package, take off paint applications and release the same figure? This is not a new character! Not by any stretch of the imagination.

The appropriate thing to do here would have been to release more of the Cobra Island figures. Not lackadaisically slap a new coat on it and call it new. Not only that, but this doesn't resolve the problem. Fans want the original. They want the goggles. They want the paint apps. They want the arm band. This just isn't right.

Further, it glosses over the other problem of where are the other three figures from the wave that people couldn't get? Are these too going to be dumb downed, renumbered and re-released?  This is not the way to do it. As I said above, it only cause the collectors who want every figure to buy them again. This is not helping supply and demand. 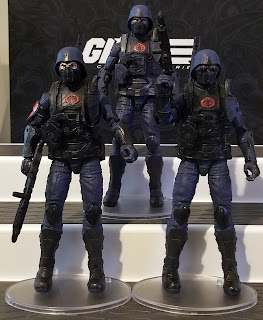 I now have three variations of this figure on my shelf, and I can only imagine how many more times Hasbro is going to throw this out there with slight changes or no changes at all, but packed in with vehicles or multi packs. They've done it to death with Stormtroopers in Star Wars, so I have no reason to believe they will do anything different here.

This line is very love / hate for me. The figures are amazing...Well...The ones that aren't silly repaints, and they come with a slew of fantastic accessories. However, the continuous distribution debacles and overall lazy repainted re-releases, especially those touted as new figures with new numbers, is annoying.

I really want this line to succeed and grow. But, I'm also realistic. People want to enjoy their hobbies, and when problems like this exist, especially the distribution ones, people throw in the towel. Say what you will about Star Wars, while supply issues are still a problem, people aren't buying these in droves like they used to. So many fans have gotten fed up and walked away. It would be a shame to see this happen with G.I. Joe Classified. 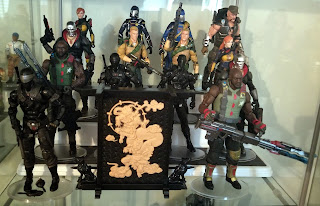 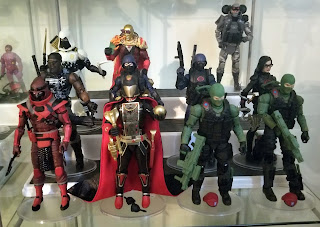 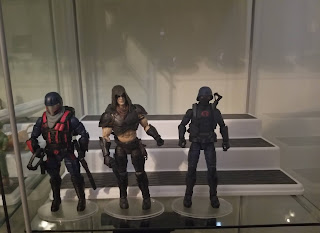