We were all seated in the family room of our parent's home in Oregon, and my dad said, "Let's watch a movie." We had no idea what we were about to get, but man, was it memorable. The fantasy world, the labyrinth, The Goblin King and his minions, Sarah on the hunt through all of it for her baby brother Toby, all masterfully crafted from the minds of Terry Jones and Jim Henson. 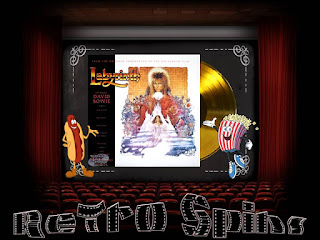 Sarah (JENNIFER CONNELLY) has just made a terrible wish. She wished her baby brother would be taken away by goblins - and her wish has come true! The Goblin King (DAVID BOWIE) has whisked the boy off to his castle to be goblinized. Now Sarah must rescue him, but that means getting into the Goblin Castle and facing the mighty, Jareth.

Between Sarah and the castle stands the LABYRINTH, a magically mesmerizing world of mazes, mystery and spellbinding excitement! A world where all sorts of endearing and tricky, delightfully mischievous creatures lurk around every corner! Enter with Sarah into a world of wonderment...enter into the LABYRINTH! - Back of the original VHS

I initially had Grease 2 and mind to finish off Retro Spins for 2020. However, just as I was about to play it, my mind went to Labyrinth, and was no parts of moving on from there without firing it up. It was a good choice.

David Bowie and Trevor Jones created a fun mixture of vocal and instrumental tracks which drop you right into the movie itself as they play. The album opens with Bowie's superb Underground, and from there flips back and forth between his sung tracks and Trevor Jones score.

Listening to this album made me want to watch the movie again, which is something I may very well have to go do now. I suppose that's what makes a great soundtrack in the long run. One which ignites your mind so fully with imagery of the film that you need to go watch it just to appease yourself.

Then there are the songs which induce nightmares in your head - Such as Chilly Down by the Fire Gang creatures from the film. Those things spooked the crap out of me as a kid, and even in my adult years I don't enjoy that scene. Thanks for scarring me, Labyrinth!

On a side note, I always wished there was a studio version of Magic Dance released that featured the goblins and baby from the film. The one on the soundtrack is fine, and does the trick when you want to hear it. But, it could be so much better.

Overall though, it was a fantastic album to listen to. I ended up adding all of the David Bowie tracks to my iTunes and iPod shuffles. I passed on all the Trevor Jones tracks as well as Chilly Down.

With that, another year wraps up for Retro Spins here at The Toy Box. Next year I'll be jumping back into studio albums from some of my favorite artists. For now though, it's been rather enjoyable to listen to so many soundtracks from classic, and not so classic, 80's films. I'd definitely like to do this again in the future, but need to bolster up my 80's soundtracks first in order to encompass a full year.

Click "HERE" to go back to the home page. For more posts related to this one, please click the labels below.
Posted by The Toy Box on December 29, 2020
Email ThisBlogThis!Share to TwitterShare to FacebookShare to Pinterest
Labels: 1986, 80's Album Review, 80's Music, 80's Music Review, David Bowie, Labyrinth, Music of the 80's, Retro Spins