Retro Spins: This Is Spinal Tap

I was that guy who thought Spinal Tap was a real band. But, I claim innocent in all of it. I wasn't introduced to them until the 1991 Tribute to Freddie Mercury Concert where they took the stage and sang Majesty of Rock. To me, they looked like a legit band. Then I saw, "This Is Spinal Tap". Great movie, but boy did it make me look like an idiot. 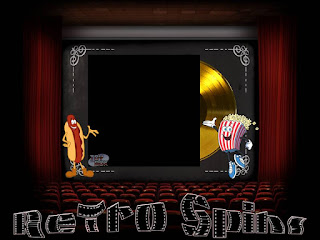 You'll never be able to watch a rock group seriously again after experiencing this hilarious comedy about a supposed heavy metal band called Spinal Tap. Once upon a time they had a pretty big hit song. Now, nearly two decades later, Spinal Tap still clings to some flint of their lost glory as they embark on an accented-plagued tour across America. In Cleveland, the group gets lost underneath the stage. In Washington, they're accidentally booked at an Air Force formal dance. And in a Chicago record store, no one shows up to get their autographs. It's the "rockumentary" parody that'll leave you cheering. Directed with great wit and affection by Rob Reiner. - Back of the original VHS

With its all black cover, the soundtrack, which is also featured in the movie, is in and of itself a comedy. More ironically are the number of bands / singers which have gone on to mimic the now iconic style for their own albums.

On the surface, This Is Spinal Tap comes off as just your regular every day heavy metal album. Tracks such as Hell Hole and Tonight I'm Gonna Rock You Tonight (yes, that's the title) deliver massive guitar licks and thunderous drums. However, when you sit back and actually listen to the lyrics, that's where you'll start to hear the humor behind the songs.

"Heavy (Duty)! Brings out the duty in my soul!"

It's childish in a way, but hey, sometimes things can just be stupid funny. Nothing wrong with it.

No, this isn't the kind of album I'm going to listen to repeatedly. It's honestly not even one I'll add any tracks to my iPod or iTunes shuffles, but it's still a great listen when you're in the mood for silliness and music all wrapped into one fantastic package.

Click "HERE" to go back to the home page. For more posts related to this one, please click the labels below.
Posted by The Toy Box on December 15, 2020
Email ThisBlogThis!Share to TwitterShare to FacebookShare to Pinterest
Labels: 1984, 80's Album Review, 80's Music, 80's Music Review, Music of the 80's, Retro Spins, Spinal Tap, This Is Spinal Tap