It was the sequel all the fans wanted, but not the movie they wanted. Boy, I know that story...(prequels)....oh, excuse me. I may be on the outside for this one, but I actually really liked Ghostbusters II. I thought it was really funny, and I dug the story a lot. 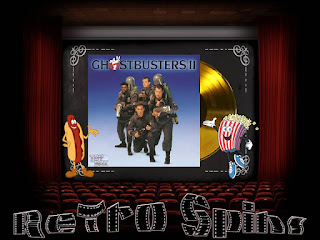 Bill Murray, Dan Aykroyd and Harold Ramis regroup to nuke the spooks in the highly-spirited GHOSTBUSTERS II. Sidelined for five years since their spectacular save (and near destruction) of New York City, the superstars of the supernatural spring back into action when the infant son of single-mother Dana Barrett (Sigourney Weaver) becomes the target of a powerful demonic force Reunited with the no-nonsense Zeddemore (Ernie Hudson), nerdy, near-sighted Louis (Rick Moranis) and their ever-industrious secretary Janine (Annie Potts), the heroes of the hereafter must put a stop to an enormous underground river of slime ready to rot the roots of the entire Big Apple. Now, if your hometown was on the verge of being sucked down into the 10th level of Hell, who else would you call? - Back of the original VHS

I almost lost it when typing the above synopsis of the original VHS. I couldn't believe Ernie Hudson was getting the shaft again, until I reached the halfway point, and all was redeemed.

Honestly, I really like this soundtrack. It's one of the few which I can say I enjoy every single track from start to finish. It's so different from what I would normally listen to, with its inclusion of rap, but at the same time, that's part of why I like it. Plus, the songs are just good.

Bobby Brown, New Edition, Doug E. Fresh and The Get Fresh Crew, Elton John, Oingo Boingo, Glenn Frey - These are by no means peasants in the world of 80's music. Each one brings their absolute "A" game.

Each and everyone of the ten tracks from this album is in my iTunes and iPod shuffle for multiple listening sessions from now until eternity...Well, maybe not that long.

Click "HERE" to go back to the home page. For more posts related to this one, please click the labels below.
Posted by The Toy Box on December 08, 2020
Email ThisBlogThis!Share to TwitterShare to FacebookShare to Pinterest
Labels: 1989, 80's Album Review, 80's Music, 80's Music Review, Ghostbusters II, Music of the 80's, Retro Spins