One of my all time favorite sequels, The Karate Kid Part II brought with it a fantastic story of love, honor, and familiar friends in a new and exciting setting. 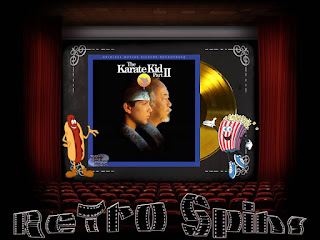 The price of honor. The power of friendship. "THE KARATE KID PART II." Ralph Macchio and Noriyuki "Pat" Morita recreate the roles that brought them international acclaim in "THE KARATE KID," when karate student Daniel LaRusso (Macchio) accompanies his wise and whimsical teacher Mr. Miyagi (Morita) to his ancestral home in Okinawa. For the boy, it's a jorney to an exotic, new world - and new clues to his mentor's secret past. For Miyagi it's an opportunity to see his father one last time, and to rekindle a romance with his childhood sweetheart (Nobu McCarthy). But Miyagi's return also re-ignites a bitter feud with long-time enemy Sato (Daniel Kamekona) - a feud that involves young Daniel in a brilliant collision of cultures and combat. Now, far away from the tournaments...the cheering crowds...the safety of home, Daniel will face his greatest challenge ever when teacher becomes student, and the price of honor is life itself. - Back of the original VHS

It was with The Karate Kid Part II that Peter Cetera became a name in my vocabulary. As a kid, I had no knowledge of his involvement with the band Chicago, and it's not like the internet was a thing for me to look it up. My knowledge of music relied heavily on the back and inner sleeves of album covers, and what ever I heard from the various DJ's and VJ's.

I remember having this album as a kid, and playing it frequently in my Walkman - with one catch. I never really got past the first two songs, Glory Of Love by Peter Cetera and Rock And Roll Over You by The Moody Blues. I'm sure I did once, but never bothered to beyond that. Why? Because I recall not really liking all that much.

Today seemed like the best time to check in on this gem from 1986 and see if my older, more mature mind had changed.

Not really, no. I still very much so enjoy the first two tracks, noted above. Fish For Life from Mancrab and Rock Around The Clock by Paul Rodgers weren't terrible, but not something I can see myself wanting to hear often.

The rest though, still going to have to take a hard pass on them. For as much as I love the movie itself, the soundtrack is a hard opposite spectrum. I just don't enjoy it. Further, I don't even honestly know where the majority of these songs are in the film itself. This makes them all the more less enjoyable because they just sound like random songs - Bad ones at that. New Edition massacres the classic Earth Angel making me wish they would have just used the original - Or even the version from Back To The Future. Anything would have been better.

I'll be watching The Karate Kid Part II for many more years. I won't, however, be listening to the soundtrack.

Click "HERE" to go back to the home page. For more posts related to this one, please click the labels below.
Posted by The Toy Box on December 01, 2020
Email ThisBlogThis!Share to TwitterShare to FacebookShare to Pinterest
Labels: 1986, 80's Album Review, 80's Music, 80's Music Review, Music of the 80's, Retro Spins, The Karate Kid, The Karate Kid Part II