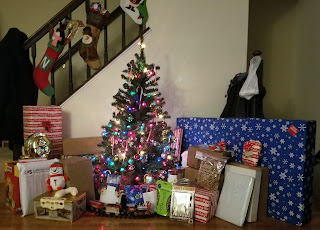 After being confined to staying home for 3/4 of 2020, I made the decision for my girl and I that we were making Christmas BIG! With how crappy the majority of the year has been, I was not closing the year out on any form of subpar level. It just wasn't going to happen on my watch.

We both started our day with listening to / watching our respective selected Christmas day services. First and foremost, we wanted to recognize the day for what it means to us - The birth of our Lord and savior.

The dog started his day by informing us that his patience was over. He showed this by snatching a rawhide bone from underneath the tree. He then spent the next thirty minutes chomping on that, but apparently wasn't done. From there, he returned to the tree and promptly grabbed a toy from underneath it, proceeding to obliterate it.

As for us humans, I made a small breakfast for my girl consisting of crispy scrapple and coffee. I, on the other hand, opted for a bowl of Mandalorian cereal with almond milk. In terms of cereals, it's not the best I've ever had. It tastes like Kix, which if you've ever had them, you know they're relatively tasteless. This was somewhat saved by the mildly fruity flavored Grogu shaped marshmallows. For what it was worth, it did the trick.

From there, the phone calls and texts began to each of our respective family and friends. We also did a FaceTime video with her youngest son and his wife, where we watched them open up all of their presents. I gave my girl her stocking, which she opened on screen with her kids. I then took the opportunity to sit back and just relax with a cup of coffee. I also got a surprise ebay gift card from her kids.

The plan for lunch was to have some turkey breast and bacon sandwiches, so around 10:00 I went back to the kitchen to start putting this all together. They turned out pretty good, with all the fixings being nice and fresh. No, that's not mustard on the bread. It's cheese I baked into the top, while toasting it in the oven. 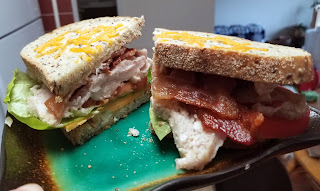 As I baked the turkey in the oven, I was happy to see that it had lightly started snowing. It didn't last long, and it didn't accumulate, but it was just nice to see the snow on Christmas day.

After we ate a relatively early lunch, we tried watching Pixar's Soul on Disney+. As the movie played, I opted to open up my stocking items, receiving a new pair of ear buds and an array of candies. If you can't tell from the photo, I'm a big fan of coconut and marshmallow based treats. My girl also gave me a very unexpected $100.00 ebay gift card, and perhaps a hint with the two-pack deodorant. Hmm... 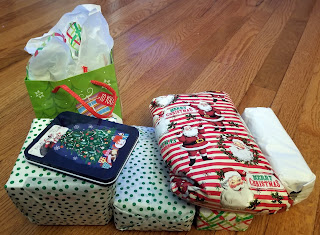 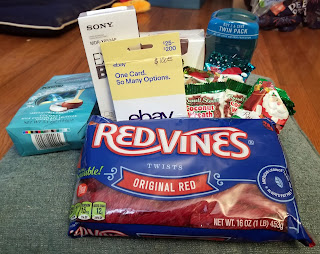 I'll spare you the details of what happened next, but when we came back downstairs, we got a call from my brother, and took turns opening the presents he sent us, and him opening what we sent him. 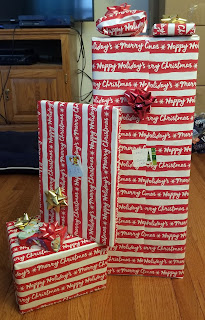 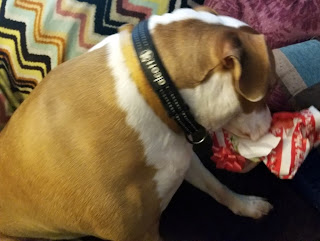 No, not all these packages are for me. They're for my girl, the dog and me. Despite what my brother says, he loves that dog. And, yes. The dog opens them himself.

As for me, I got the uber rare misprinting blue Lizard error of McFarlane's Spider-Man number one, a massive arcade stick pre-loaded with 4,000 arcade games, and the Game & Watch Super Mario Bros.

The dog was getting a little greedy at this point, thinking that every package being opened was supposed to be for him. He stuck his face in everything as we unwrapped the items.

After wishing my brother a Merry Christmas, we decided to pop Wonder Woman 84 on HBOMAX. The movie was actually pretty good. During it, I stepped out a few times to start dinner. I made us a prime rib roast, mashed potatoes and creamed spinach, all from scratch (much like lunch). For those of you who don't know, while I love to collect toys, my biggest passion is actually cooking. I love making food for people. 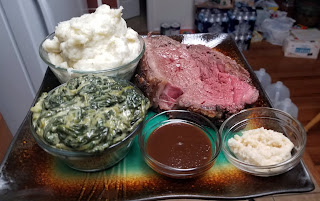 After a hearty meal, and finishing the movie, my girl asked if I wanted to open the presents under the tree. After thinking for a moment, I had to take a knee and admit that between cooking and the day itself, I was actually really tired. She said she was too, and we decided that we would leave the wrapped presents under the tree for tomorrow. There was no reason to pile on for the day, when it was already such a full day filled with good food and the items we already received in our stockings, as well as, from my brother and her youngest son.

While we didn't open the wrapped gifts, we decided to open the brown boxes which were under the tree. These weren't necessarily Christmas gifts. Rather, they were ebay items I had picked up over the past couple months, which rather than open when they arrived, I just threw them under the tree. These contained runs of three 90's Spider-Man series, The Sensational, Unlimited and Chapter One. I spent the next hour rebagging these on the couch while listening to random episodes of Bob's Burgers on Hulu, finishing up by fighting to stay awake to write this post. 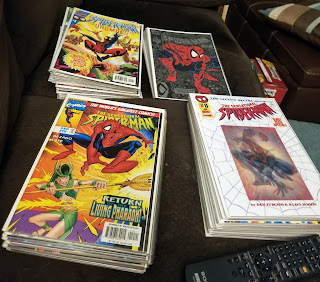 But now, it's definitely bed time.

I honestly don't mind postponing opening the Christmas tree gifts until tomorrow. I wait all year for this holiday to come, and don't really see the need to wrap it up as quickly as possible. I'm totally fine with spreading it out a few days. With how exhausted I am, I know that I'll enjoy it more tomorrow than cramming it all into one massive day. Sometimes it's nice to just take your time and treasure the moments.

Posted by The Toy Box on December 25, 2020
Email ThisBlogThis!Share to TwitterShare to FacebookShare to Pinterest
Labels: Christmas, Christmas 2020