Vision Quest was Madonna's first debut in a feature film, coming just month's before her, somewhat, staring role in Desperately Seeking Susan - Or as I call it, Disgustingly Stinky Susan. 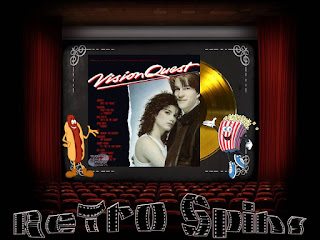 Folks in Spokane don't understand high school wrestler Louden Swain. Someday, he says, he'll be a "doctor in outer space." But right now he's obsessively running, lifting, skipping rope and skipping meals - all so he can lose 23 pounds in a dangerously short time and take on Shute, the undefeated, tough-as-nails 168-pound champion who's the best wrestler in the state, if not the universe. And you get the feeling Shute's going to propel Louden into orbit ahead of schedule.

Matthew Modine (whose work in Birdy and Mrs. Soffel has already established him as one of Hollywood's brightest new stars) is Louden, a mop-headed, headstrong, 191-pound wrestler who's good enough to contend for a collegeathletic scholarship. But he's not satisfied with "good." Louden wants to be - and beat - the best. And that sets him on a path that Kuck, Louden's Mohawked best friend (Michael Schoeffling of Sixteen Candles) calls a Vision Quest.

Nothing distracts likeable Louden from his glorious quest. Not the gnawing emptiness in his stomach. Not even the mousey editor of the school newspaper who has the hots for him. But when sexy, 21-year old drifter Carla (Linda Fiorentino in her superb screen debut) comes into his life, Louden is pinned to the mat by unrequited love. In time, and iwth a little help from friends like a patient teacher (Harold Sylvester) and a sagacious short-order cook (J.C. Quinn), Louden gets his weight down, gets the girl and gets a shot at Shute in an exhilarating match were the battle cry is "Take no prisoners."

Like Rocky and The Karate Kid, this is an upbreat spirt-lifter that lets you share the good feelings. Get in on the good times now and make your next video quest a Vision Quest.  - Back of the original VHS

It's got a heavy sounding soundtrack, which delivers fast paced, big beat songs. Sadly, the majority of them are forgettable. I was surprised to check the status of the album, and find it was on track six, because quite honestly I didn't even notice the prior five songs.
I write these posts far in advance (it's actually January 19th, 2019), and over the course of this past week I've actually listened to the majority of what you've read about over the entire year of 2020 in Retro Spins. I say this, because at this point, I don't know if I'm just a little burned out on listening to music or if I'm truly just not hearing good stuff. I may need to take a little break before getting back into this.

Overall though, the album did have a couple tracks worth tapping my toe to. Dio's Hungry For Heaven was the first one to step out from the crowd. Lunatic Fringe from Red Rider isn't terrible, but it's also readily available on the soundtrack to Heavy Metal and the band's studio album, Red Rider, which both came out in 1981.

I guess one also can't hate on Foreigner's Hot Blooded. Then again, this also isn't an 80's song having been released on the band's 1978 studio album, Double Vision.

The true reason to get this album, and why it ended up on my want list is actually Madonna's Crazy For You. This track was never released on any of her studio albums - Though it can be found on her compilations. Still, if you're like me, and like that nostalgic feeling of having the "first pressing" of a track, then this is definitely the way to go for this song.

Click "HERE" to go back to the home page. For more posts related to this one, please click the labels below.
Posted by The Toy Box on November 03, 2020
Email ThisBlogThis!Share to TwitterShare to FacebookShare to Pinterest
Labels: 1985, 80's Album Review, 80's Music, 80's Music Review, Music of the 80's, Retro Spins, Vision Quest