What a feeling indeed! 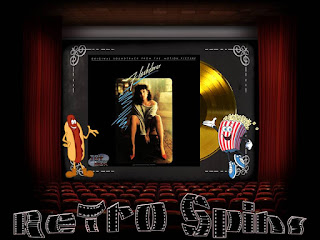 The visual and musical box-office smash Flashdance is the exhilarating story of Alex Owens (Jennifer Beals), a fiercely determined and beautiful 18-year old woman, who works as a welder by day and dancer at a local bar at night. The film sparkles with the music of the '80s including the No. 1 hit song sung by Irene Cara "Flashdance - What A Feeling," and "Maniac" sung by Michael Sembello. We follow Alex's struggle to gain independence, find love, and realize her dream - to dance at the Pittsburgh Conservatory of Dance. - Back of the original VHS

Fantastic album, pretty much, from start to finish. Out of the ten tracks, there were only two which didn't really tickle my fancy. I suppose at this point, it would be faster to list those two, verses the other eight. With that said, those were Manhunt by Karen Kamon and Imagination by Laura Branigan.

The album punches hard with Irene Cara's Flashdance - What a Feeling, and from there just kept delivering one song after the other, again, for the most part. I definitely enjoyed listening to this one. I suppose it also goes without saying, there were several tracks added to my iTunes and iPod shuffle.

I honestly didn't expect to like the Kim Carnes song, I'll Be Where The Heart Is, because I'm honestly not that big of a fan of hers. In fact, up until this point, Bette Davis Eyes is the only song I really liked from her. Turns out, her contribution to the Flashdance soundtrack may very well be my all time favorite from the singer. Good job, Kim Carnes!

Michael Sembello's Maniac and Donna Summer's Romeo have been favorites of mine long before I even knew they were from this soundtrack. They're 80's staples going all the way back to my days of listening to Rick Dee's Weekly Top Forty.

This one will definitely be getting a few more plays in the near future.

Click "HERE" to go back to the home page. For more posts related to this one, please click the labels below.
Posted by The Toy Box on November 10, 2020
Email ThisBlogThis!Share to TwitterShare to FacebookShare to Pinterest
Labels: 1983, 80's Album Review, 80's Music, 80's Music Review, Flashdance, Music of the 80's, Retro Spins