I had never even heard of this movie until coming across the soundtrack in the dollar bin of a CD vendor. Even then, I still haven't seen the movie - or even bothered trying to. 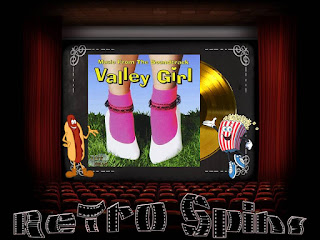 Swept on the heels of the "Valley Girl" phenomenon, the film VALLEY GIRL was released to record-breaking audiences in the summer of 1983. But those who were expecting a simple satire about the Valley Girl had got much more than they asked for. VALLEY GIRL was an instant summer smash hit, hailed as "a joyous romp," "peppy and wittingly comic," "sweet and honest" and "one of the most appealing romantic comedies in a long time." The outstanding musical score was also the recipient of rave reviews. VALLEY GIRL features the top groups MEN AT WORK, THE CLASH, JOSIE COTTON, CULTURE CLUB and many others.

The delightful story focuses on the Romeo and Juliet like love between Julie (DEBORAH FOREMAN), a true "Valley Girl" from California's wealthy San Fernando Valley, and Randy (NICOLAS CAGE), a fast-moving teen from the Hollywood Hills. From the time they meet until the tale's tender conclusion, it's a war of the "cliques" with Julie's proper Valley friends trying to reunite her with her old flame and Randy and his pals crashing the Valley parties. To add to the irony, COLLEEN CAMP (THEY ALL LAUGHED) and FREDERIC FORREST (APOCALYPSE NOW) play Julie's free-spirited Sixties parents, terribly confused about the ultra-conservative daughter they've raised.

VALLEY GIRL - the sleeper hit of 1983 - now a rollicking, fun-filled home video treat! - Back of the original VHS

It's interesting that the back cover of the VHS talks about bands such as The Clash and Culture Club being in the soundtrack - Because they're not. Upon investigating this claim, I found there were actually four bands which were supposed to be included in the film and subsequent soundtrack which ended up being cut out due to issues with acquiring the rights. Obviously, the two above, as well as Bananarama and The Jam. Those four bands alone would have made this album a hot buy.

Issues with the music became such a mass of trouble, that the release of a soundtrack was actually cancelled. It wasn't until 1994 that Rhino would release a compilation of the songs from the film - The album being played here today.

It's very heavily driven by punk and new wave style music, which isn't honestly my thing, but it was still somewhat enjoyable to listen to. Admittedly though, I didn't end up grabbing much of anything off of it for my 80's shuffles.

I didn't recognize a lot of band on the soundtrack, so it was really no surprise to me that it really didn't end up being for me. Oh well. I suppose at the end of the day it doesn't hurt to try new things.

Click "HERE" to go back to the home page. For more posts related to this one, please click the labels below.
Posted by The Toy Box on November 17, 2020
Email ThisBlogThis!Share to TwitterShare to FacebookShare to Pinterest
Labels: 1983, 80's Album Review, 80's Music, 80's Music Review, Music of the 80's, Retro Spins, Valley Girl