I was initially going to include this post in with last week's on Pacipa's Super Amigos, but felt in the long run they would be better suited to be separate from each other.

The history on this line is quite identical to that of the aforementioned figures. They came about after the original Kenner Super Powers line was cancelled in the USA, and once again, were intended for distribution in Argentina. This time by toy manufacturer PlayFul.

These figures were released in 1990, the year following the Pacipa releases. Much like that line, you won't find every figure from the original Kenner line, but you will find ones which weren't released by Pacipa. Vice versa, you won't find certain ones from Pacipa in PlayFul's line up.

Additionally, much like the aforementioned Pacipa brand, PlayFul's releases are also authentic licensed products. These are not bootlegs. See the prior post on Pacipa for further notation on this matter. 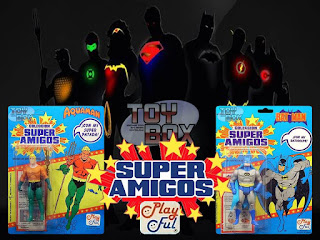 Again, because Argentina is a predominantly Spanish speaking country, you will find several of the figures retain their English translations for the names. This is because the Spanish language doesn't have a word for them. 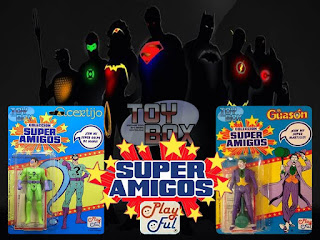 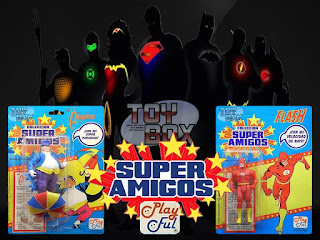 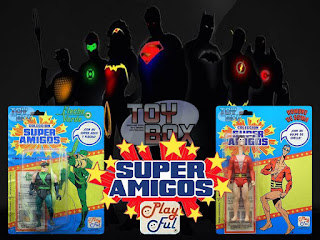 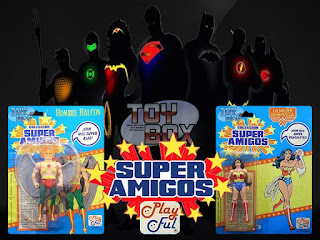 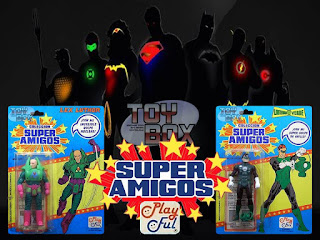 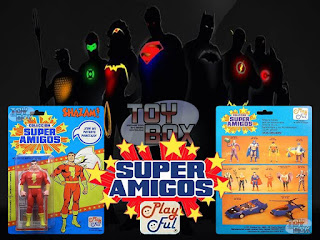 The cardback for the line (above), advertised the Batmovil (Batmobile) and Baticoptero (Bat Copter), but I have never seen these on secondary markets. Even a well structured and viable Wiki on the line doesn't make mention of these. As such, I have no clue if they even exist. If I come across them, I will make sure to add them to this post.

What's interesting to note is that the back of the box makes no mention of the Supernave, but yet, this vehicle is indeed one from the line. 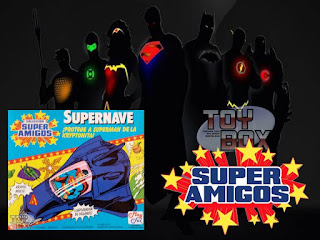 If there are any other vehicles from the PlayFul label, I am not aware of them.

Click "HERE" to go back to the home page. For more posts related to this one, please click the labels below.
Posted by The Toy Box on July 20, 2020
Email ThisBlogThis!Share to TwitterShare to FacebookShare to Pinterest
Labels: 1980's, 1990's, Pacipa, PlayFul, Super Amigos, Super Friends