I know it's a classic, but I just can't bring myself to watch it. Dirty Dancing just doesn't seem like the type of movie that's for me. But, is the soundtrack? 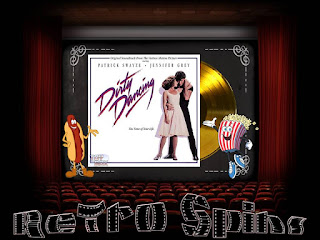 It's summer, 1963. Baby (GREY), 17 years old and all idealistic innocence, is vacationing with her parents in the Catskills. While exploring the resort grounds late one evening, she is drawn to the staff quarters by stirring music. There she meets Johnny (SWAYZE), the hotel dance instructor, as experienced in life as Baby is naive. Mesmerized by the sexy beats and uninhibited movements of "dirty dancing," Baby soon becomes Johnny's prize pupil - in dance and in love. - Back of the original VHS

Well...I didn't hate it, but I wouldn't go so far as to say I loved it either.

I guess, first and foremost, I can't really consider this album to be a pure "80's" album. It's got a lot of tracks on it from the sixties, which while decent songs, don't fall into what I was expecting to find here. I've always been a fan of 50's and 60's music, specifically doo-wop. As such, I didn't hate the fact that there were tracks from non 80's eras on this album. Overall though, I would have preferred something pure 80's here.

The album leader, (I've Had) The Time Of My Life by Bill Medley and Jennifer Warner is probably one of my least favorite 80's songs. It ranks up there with Berlin's Take My Breath Away. It just grates on my nerves. Though expected to be found here, starting the album with it was definitely not a highlight for me - With the exception of getting it out of the way right off the bat. I forced myself to sit through all four minutes and fifty seconds of it.

Hungry Eyes, the albums second single, isn't my favorite from Eric Carmen, but depending on my mood, it's still something I can sit through. Though I'd just as soon skip it for something else.

I think in the 80's, everyone was shocked when we found out it was Patrick Swayze himself behind the vocals of the song, She's Like The Wind. This to me is probably the best track from the album. However, this could just be because I enjoy so much that it's Swayze - Not that I'm in any way a big fan of his.

There are other 80's tracks on the album, but quite honestly they're easily forgettable.

Overall, I could probably pass on this soundtrack, and it wouldn't really bother me one way or another. It doesn't particularly offer anything Earth shattering in the realm of 1980's pop rock. In fact, it more so offers a glance into the 60's. Even the follow up / sequel to it, More Dirty Dancing is nothing shy of a compilation of golden era tracks. Again though, this isn't a bad thing.

Click "HERE" to go back to the home page. For more posts related to this one, please click the labels below.
Posted by The Toy Box on July 14, 2020
Email ThisBlogThis!Share to TwitterShare to FacebookShare to Pinterest
Labels: 1987, 80's Album Review, 80's Music, 80's Music Review, Dirty Dancing, Music of the 80's, Retro Spins