Retro Spins: Madonna - Who's That Girl

Madonna gets credit in her discography on Wikipedia for being the woman behind the soundtrack to Who's That Girl. However, the reality of it is she only contributed four of the nine songs. Granted that's a lot, but it doesn't constitute as her album in my book if it's not 100% her. 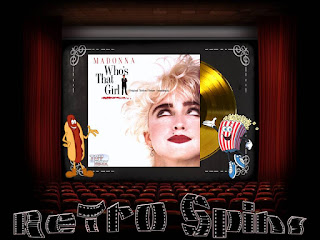 Four years in the slammer for a crime she didn't commit haven't dampened Nikki Finn's spirits. Nor her determination. The spunky parolee sets out to clear her name - and sets the Big Apple spinning in deliriously funny ways that have everyone asking "Who's That Girl?"

"That girl" is also Madonna, the singer-song-writer-actress whose stunning achievements - including more than 30-million albums sold, a starring role in the perennial favorite Desperately Seeking Susan and the Rolling Stone Reader's Poll selection as 1986's "Best Female Singer" and "Sexiest Female Rock Artist" - make her one of today's most recognizable stars. As Nikki, Madonna displays all her talents, singing four terrific songs (Causing a Commotion, The Look of Love, Can't Stop and the smash-hit title tune) from the top-selling Who's That Girl soundtrack LP and giving a charismatic "watch-that-girl" performance. "Madonna is sexy and funny - a very engaging comedian" says Vincent Canby of The New York Times.

Griffin Dunne (After Hours) co-stars as a "Yuppy-class" Mr Mile Time who encounters life-changing wild times when his straight-and-narrow path leads him to zany Nikki - and zanier escapades.

Who's That Girl. It's not a question. It's the answer if you're looking for fun-and-music-filled entertainment with a screwball Bringing Up Baby and What's Up, Doc? twist! - Back of the original VHS

Madonna's solo work is definitely far superior to that of this soundtrack. Out of the four songs she contributed, two were good. As for the other songs, I actually only ended up liking one other track; Michael Davidson's Turn It Up.

While I did make it to the very last song of this soundtrack, I have to admit Coatie Mundi's El Coco Loco (So So Bad) got so annoying I finally had to turn it off. At six minutes and twenty-three seconds, it was just too much nonsense.

If there was one good thing to come from listening to this album, it was that it made me want to find some new good music. I ended up hopping over to ebay and picking up two Corey Hart CD's, three from Bananarama, one from Cameo and another from Kim Carnes. So I suppose it wasn't a total loss investing some time into listening to this soundtrack.

Click "HERE" to go back to the home page. For more posts related to this one, please click the labels below.
Posted by The Toy Box on July 21, 2020
Email ThisBlogThis!Share to TwitterShare to FacebookShare to Pinterest
Labels: 1987, 80's Album Review, 80's Music, 80's Music Review, Madonna, Music of the 80's, Retro Spins, Who's That Girl