Wow, what a monster of an album! Lionel Richie's Can't Slow Down comes right out of the gate with the title track of the album and from there doesn't skip a beat as it jumps into All Night Long, Penny Lover, Stuck on You and rounds itself out with The Only One, Running With the Night and Hello. Hello indeed! 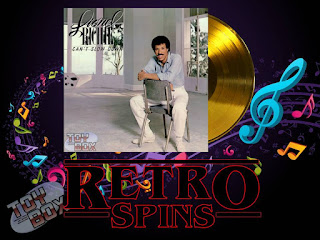 Because the album was released in October of 1983 you won't actually find any of the tracks from Can't Slow Down hitting the charts. Rather, songs from Richie's prior album were still topping.

However, come 1984 that changed - Big time. Penny Lover, Stuck On You, Hello, Running With the Night and All Night Long all hit the charts - Sometimes a mix of these songs in the same week. Lionel Richie was hot, hot, hot in '84!

Ironically, as a young child during this period I actually had no clue who the man was until I heard songs from this album. In fact, it wasn't until my young adult years that it actually dawned on me he was part of the Commodores and didn't in fact come out of nowhere.

Honestly, I don't know why I chose this album for the Retro Spin. I mean, we all know it's amazing, right? If it's any consolation, I did end up adding two other songs to my IPOD, but not because I didn't know them - Rather, I just forgot about them.

So, I'll take a mulligan on this one and chalk it up to a refresher course on an album I already knew had fantastic hits on it. All but one song made the cut for my IPOD shuffle. For those wondering, that would be Love Will Find A Way.

Click "HERE" to go back to the home page. For more posts related to this one, please click the labels below.
Posted by The Toy Box on April 17, 2018
Email ThisBlogThis!Share to TwitterShare to FacebookShare to Pinterest
Labels: 1983, 80's Album Review, 80's Music, 80's Music Review, Can't Slow Down, Lionel Richie, Music of the 80's, Retro Spins