One of my earliest memories of video games is the Magnavox Odyssey. My parents had one in pristine condition in the original box with all the packed in facets...and I took the liberty of giving it away in the lat '90's. Oops. 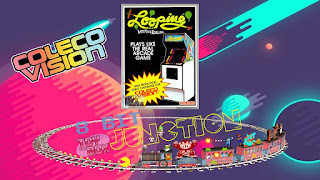 Anyway, the point I'm making here isn't that we had an Odyssey, but rather I'm painting the picture that video games were a big part of our household since pretty much the dawn of home video game consoles. As such, we were fortunate to have a ColecoVision when they were released back in August of 1982.

Even though I wasn't as good at it as my brother was, one of my all time favorite games to play on the console was Looping. Like most of the games, it was a third person view side scroller. In the game, you would start from a runway and take off with your plane. From there your goal was to fly across the city either dodging or shooting hot air balloons which got in your way. With a 360 degree control option, you could fly all over the place unhindered.

However, this was just the first part of the level. The second part got much trickier. Once you blasted open the "gate", you were set to the task of navigating through a series of pipes in order to work your way to the end. And, let me tell you about that end. It was box in the middle of the middle of the air which had giant bouncy balls bouncing in your path. You had to make it through this very short section and touch the "end wall" docking station with the tip of your plane. 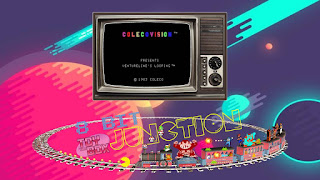 I was by no means a master of the game. In fact, there were times I would go through all of my lives before reaching the docking station once. Still, it was a blast to play. A classic game from an era of gaming where it was all about skill, hand / eye coordination and timing.

Once completed, it started all over again, ramping up the difficulty with each successful level completion. I was lucky if I got to the second level and can't honestly say I ever made it to the third or beyond.

I'd love to see an updated retro Coleco console much like we've gotten with Atari. I know they released one a few years ago, but it wasn't justifiable to pay $70.00 for sixty Coleco games. They're fun...But they're not THAT fun. The "console" would have to have 200 games to justify that price tag for me.

Click "HERE" to go back to the home page. For more posts related to this one, please click the labels below.
Posted by The Toy Box on April 20, 2018
Email ThisBlogThis!Share to TwitterShare to FacebookShare to Pinterest
Labels: Coleco, Colecovision, Looping, Video Games