Remember that time you waited twenty-six years to buy a Pepsi?

Remember when Pepsi charged $20.15 for a Pepsi?

Remember the time you tried to spend $20.15 on said Pepsi only to find out you couldn't buy it?

Remember how you couldn't spend said $20.15 on said Pepsi because Pepsi only produced 6,500?

Remember how said limited Pepsi was supposed to go on sale at a specific time on a specific date and Amazon botched it?

Yes, the day which used to stand for the time Marty McFly ventured into the future to the date October 21, 2015 has forever been soured for many Back to the Future fans. They waited those twenty-six years since the film was released in 1989 for Pepsi to produce and release a Pepsi Perfect only to get slapped in the face - Hard.

Pepsi did indeed follow through with what many fans would hope to happen and did in fact release Pepsi Perfect on this day. However, their marketing plan was such a messy debacle it left many fans up in arms just with its announcement.

Pepsi stated on October 21, 2015 it would produce and release 6,500 bottles of Pepsi Perfect for sale - 1,500 would be immediately carted off to Comic Con, while the remaining 5,000 would be made available on a first come / first serve basis on Amazon - Limit one per customer.

Oh boy, what a mess this announcement was. Did Pepsi truly believe only 6,500 Back to the Future fans existed? Did they honestly think producing such a minimal quantity would go over well? With millions of Back to the Future fans out there this gave a whole lot of people who had waited and waited for such a special occasion a big old middle finger.

Despite this ill feeling which lingered in the air, fans flocked to Amazon in droves to be one of the lucky few to purchase a bottle of Pepsi Perfect - A plan that soon turned futile for the majority of them. Many were met with continuous loading screens, timed out screens and worst of all  a sold out label within mere minutes of going on sale. Even those fortunate enough to get the item into their online cart and thought they had achieved victory soon found themselves with messages that their transaction could not be completed. Anger ensued across the internet.

With bad press surrounding the campaign growing rapidly by the hour, Pepsi made an announcement that it would release a second batch of limited Pepsi Perfect. Once again 6,500 bottles would be made available, this time directly from Pepsi's own website.

Once again tempers flared as angry fans took to any venue they could find who would hear their cries of how even in light of attempting to make it right Pepsi was still infuriating the masses and spitting on the fans. How could anyone possibly get a Pepsi Perfect with such limited production and how could Pepsi feel this was okay? 13,000 was still minimal product to feed a fan base of millions - Only USA resident fans at that.

With more ill feelings surrounding the campaign, many tried once again on November 3, 2015 to get one of the final runs of Pepsi Perfect only to once again be faced with the same issues. Lag outs, unfulfilled orders and in short, no Pepsi Perfect. The outrage continued once again online and to this day remains from bitter fans who will always remember the day(s) Pepsi screwed them on fulfilling their ultimate Back to the Future fandom moment - Enjoying a Pepsi Perfect while watching the Trilogy.

So what was all the hype about? Why was everyone so eager to purchase a Pepsi for $20.15? What's the big deal here? 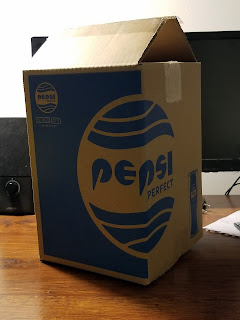 Okay, it comes in a neat box. That's great for collectors. It's got the fun Pepsi Perfect logo on it and if you look closely you can see a little more detail in the corner; 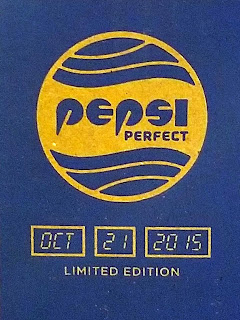 That's cool. Every collector loves seeing the words limited edition on their item. Makes them feel like they got something special. 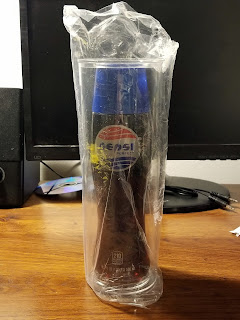 The bottle fits nicely in the center of the box in a little cut out designed specifically to hold it and it's then placed in a plastic bag...To seal in freshness? I don't know.

Let's take it out of the bag and have a closer look. 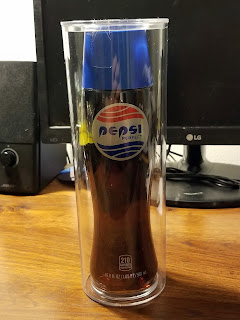 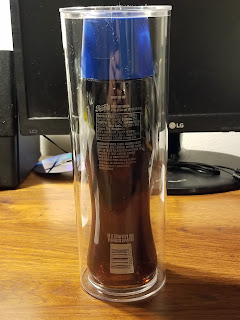 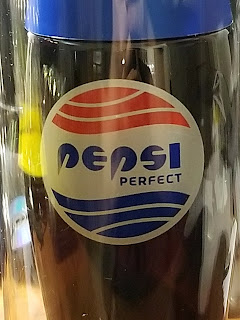 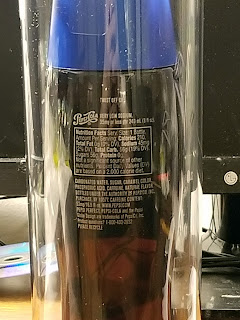 Okay, it's a fancy bottle and it looks like tooth rotting Pepsi inside the bottle. It's neat that it's made with real sugar and not corn syrup - Common these days, but not so much in 2015.

So how does it taste? 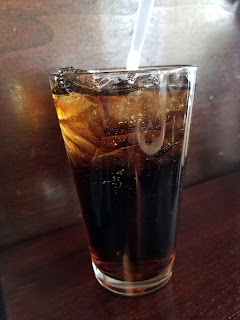 Well, I wouldn't know. That's actually a Coke I ordered at a restaurant for this post. I'm not about to drink a Pepsi that cost me $20.15 (plus shipping) or that's three years old at this point. Plus I don't like soda. It makes a great display piece in my collection, but that's about as up close and personal as I'm going to get with this thing.

Click "HERE" to go back to the home page. For more posts related to this one, please click the labels below.
Posted by The Toy Box on April 11, 2018
Email ThisBlogThis!Share to TwitterShare to FacebookShare to Pinterest
Labels: Back to the Future, Pepsi, Pepsi Perfect