Welcome to yet another new segment here at The Toy Box. Today starts the new weekly roll out of 8 Bit Junction!

8 Bit Junction will go down memory lane and share a story behind a game from my past which hit so hard on my young (or adult) mind that it shaped the way I looked at video games. Now, before I get started on my first of many entries to come, don't let the name fool you. 8 Bit Junction, while catchy in its title, is by no means going to be limited to the realm of 8 bit games. I'll touch on all types of games, generations and genres.

For my first entry, I'm turning the clock back to 1987. I was spending the night at a friend's house and we were left alone by his parents who were most likely out on a date night. Parents could do that back then - You know, leave kids at home alone and go out.

Unlike most visits to said friend's house which often times lead to playing some form of mock sword or war game outside in his yard, we spent the day indoors. Why? Because he had gotten not only a brand new game for his NES, but also an NES Advantage!

The game? Zelda 2: The Adventure of Link. 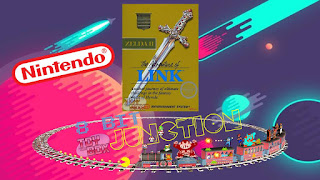 This was by no means my first Nintendo game ever played, but yet it felt like an all new experience when the cartridge was fired up. As I watched my friend start off our session, I thought, "This is kind of stupid. You're a teeny little blob on the screen, can't swing your sword, can't...oh wait a minute..." That's when he got "hit" by an enemy on the Overworld and was transported to a side scrolling screen filled with jellies jumping at him.

Admittedly, Link's sword had gotten a little puny since his last adventure, but still, this was cool. As I watched him delve into dark caverns and then eventually back out the way he came to a town the game took another exciting twist - Magic powers! Link was no stranger to gizmos and gadgets in his first adventure, but now he could cast spells too? Wow!

As we alternated back and forth that night taking turns at the helm as we pushed forward through dungeon after dungeon - Some more efficiently than others, we soon learned that not only were Link's lives limited, but so too was the option to continue. Thank goodness the game had its own battery pack for saving periodically. 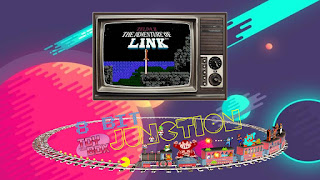 Though we didn't finish the game that evening - Far from it - I later received my own copy of the game (well, my brother and I did to be exact) and throughout many play sessions honed my skills at the game. With a little help from Nintendo Power, I also learned of all the heart / magic container and extra man locations.

Then I got even smarter. While playing one day I made note that while difficult, the Bubbles were not only killable, but yielded a fair amount of XP. Not only that, but there was one right in the first dungeon. Hmm...So if I kill it, enter and exit the screen...WOW! The Bubble was back! You know where I'm going with this. Before I even beat the first dungeon I grind-ed out every last bit of XP needed to max health, attack and magic. This meant every dungeon I beat would garner 9,000 XP which equated to an extra life. Now I was a pro at the game, and boy was it easy to get through the first few dungeons and nab the coveted hammer.

It wasn't long after that I beat the game for my first of many times. I got so proficient at it that to this day I get through the entire thing with one life - Because yep, I still grind out all the XP on the first Bubble I find in the first dungeon.

Click "HERE" to go back to the home page. For more posts related to this one, please click the labels below.
Posted by The Toy Box on April 06, 2018
Email ThisBlogThis!Share to TwitterShare to FacebookShare to Pinterest
Labels: Nintendo, Nintendo Entertainment System, The Adventure of Link, The Legend of Zelda, Video Games, Zelda 2