Ah, Sierra's classic adventure games! How I love them all. Is it possible to choose your favorite? Gosh, I really don't know. Before I jump into this. Let me take a 2 Minute Toy Break. See, this all started in the era 20 Years Before 2000 when things were Branded in the 80's and really fun, but not necessarily Cool and Collected. The Stunt Zombie army had yet to pillage Alexis' Treasures as it was still under the protection of Mr. Smith's Plastic Bubble. Therefore it was still relatively easy to go on Adventures in Gaming after a session of fireworks and action figures which often times resulted in an Action Figure Barbecue. Good thing I always kept a Green Plastic Squirt Gun near my side to put out those Toyriffic fires. Man did those Fully Jointed Play Things take a beating. Such Weird Fantastic Toy Adventures I had back in the day. Thank goodness those toys weren't alive. That would've been horrific to me if ever there was a Revenge of the Toy Box and they all attacked me. I would have needed something massive like a Dinosaur Dracula to stop them. But enough Retro Ramblings. Let's get into today's post. Oh...and G.I. Jigsaw...Cause that doesn't fit into anything above. 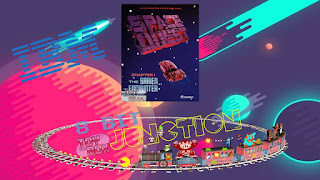 I will say this - Space Quest was my first ever Sierra game I played and to this day it remains a rotating title in the exclusive list of games I replay. In fact, I try to play all the Sierra titles at least once a year and have even written my own walkthroughs for them should I ever get stuck - An impossible feat at this point with how many times I played them.

However, I too once struggled with making my way to the end of each adventure game while obtaining all the points. In fact, it wasn't until well into my adulthood that I can even claim to have done so.

For me, I was just excited to be playing the game back in 1986 on my dad's home computer. I didn't know much about computers back then, how they worked, what they did - You know, much like these days where if I can't fix it by poking it with a stick I'm screwed.

What I did know was those rare occasions where my dad would give up the seat at our round table located in the den of our home and let my brother and I play for a while. Admittedly, my brother was always slightly better at the game. Being older I guess gave him an added advantage of puzzle solving. I remember it used to upset me so much when he'd load up his save game and I would see he not only had more points, but was so much further along than I was. 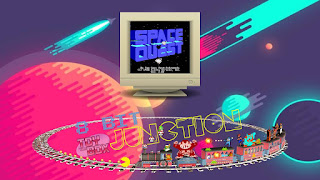 This was probably helped by the fact that he was also far more patient than I was and actually read the story. Meanwhile I was an enter button addict. I didn't want any words slowing up my progress in the game because play times were limited by the timer in dad's head. This of course was my ultimate demise in actually getting good at the game because one has to read the story to get clues and overall trajectory - Something I would find out in my (young) teenage years when revisiting the game.

Mind you, I did make it all the way through to the end of Space Quest when I was a kid. I just needed a little help from my brother or dad who were also playing through at the same time. In fact, Space Quest is probably the first game I ever completed on PC.

Something about those play sessions as a child stayed with me for many years and when I was old enough to have my own computer I was excited to find the games were not only still readily available for the latest and greatest version of Windows 95, but also updated to include VGA versions.

Since then, I have owned many copies of Space Quest (all its sequels and other related Sierra titles). Like I said above, it comes through my rotation of replays frequently. In fact, just a few weekends ago I finished yet another play through of Space Quest V.

Click "HERE" to go back to the home page. For more posts related to this one, please click the labels below.
Posted by The Toy Box on April 13, 2018
Email ThisBlogThis!Share to TwitterShare to FacebookShare to Pinterest
Labels: IBM, Sierra, Space Quest, The Sarien Encounter