Freddie Mercury swore the best singing voice he ever heard was that of Aretha Franklin. He all but idolized her.

Meh...She's okay. Ms. Franklin does get a very well earned nod of respect for having released albums over the course of fifty-eight years - Her first being 1956's Songs of Faith and her latest being 2014's Aretha Franklin Sings the Great Diva Classics. Forty-One albums in all - And mind you, that's just the studio ones. It doesn't include her handful of live contributions or the massive amount of compilations. 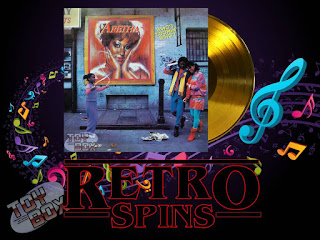 The album is peppy and upbeat for the most part with tracks that make you feel good and want to shake your money maker or tap your foot. Then there is the other side of the coin which features sultry blues like ballads sung with belting emotion. Its a fantastic mixture of hot and cold - If you take my meaning for it.

Overall it works well, but I have to admit the slower stuff is kinda of boring to me. I'm not big on ballads to begin with, so it really has to be a good one for me to take notice. For me, I'll stick to the peppy side of things on Who's Zoomin' Who.

I do have to call out that album cover though. Wow is that 80's. Bright color clothing, jump ropes, boomboxes on shoulders. Says it all, doesn't it?

Thanks to the wonderful world of singles, Aretha Franklin jumped onto the charts with Freeway of Love in June of 1985 - A month before the album officially hit vinyl racks. In October, Who's Zoomin' Who joined it on the charts followed by Sisters Are Doing it For Themselves.

Not bad for an artist who was forty-three years old in 1986, huh? Maybe Freddie Mercury was right.

Click "HERE" to go back to the home page. For more posts related to this one, please click the labels below.
Posted by The Toy Box on April 24, 2018
Email ThisBlogThis!Share to TwitterShare to FacebookShare to Pinterest
Labels: 1985, 80's Album Review, 80's Music, 80's Music Review, Aretha Franklin, Music of the 80's, Retro Spins, Who's Zoomin' Who?