For as much as I despise live shows, that is exactly how I was introduced to Thin Lizzy. With their album, Live And Dangerous. I didn't expect it to pack the punch that it did, but wow, was I floored. I immediately tracked down their album, Jailbreak, and from there expanded into more.

Phil Lynott and Brian Downey met while in school in Dublin, and were already performing in the group, Orphanage when they were approached by Eric Wrixon and Eric Bell to form a band in 1969. Unfortunately, for Wrixon, who was a minor, his parents would not sign any recording contracts on his behalf. He was therefore dropped from the band.

The remaining trio began to attract immediate attention in the Irish press, and announced in February of 1970 they would be called, Thin Lizzy. By the end of this year they would sign with Decca to record and release their first album. 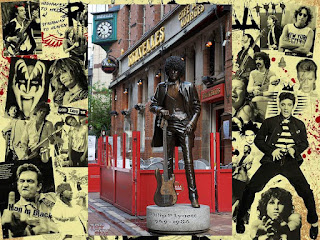 Continued failure followed with their third album, 1973's Vagabonds Of The Western World, which again, despite DJ support, failed to chart. Due to increasing ill-health and disillusion with the music industry, Eric Bell left the band shortly thereafter.

Lynott would expand the group to add two guitars, leading to Scott Gorham and Brian Robertson joining the lineup for their 1974 album, Nightlife. This "classic" lineup would remain in place for the next four studio albums, Fighting (1975), Jailbreak (1976), Johnny The Fox (also 1976), and Bad Reputation (1977).

Depending on who you ask, you're get a different response as to why Brian Robertson left the group after Bad Reputation. The commonly agreed to tale is that he was unable to deal with the success brought with the album, Jailbreak, and as such, became a heavy drinker. After an accident, which resulted in a broken hand, and his inability to tour, Lynott replaced him with Gary Moore. Moore would make his debut with the band during a tour with rock legends, Queen, and even record for 1979's Black Rose: A Rock Legend. However, he ultimately declined to be part of the group permanently.

Snowy White would join Lynott, Gorham and Downey for their next albums, Chinatown (1980), and Renegade, the latter which also saw the inclusion of keyboardist, Darren Wharton. However, White would leave after growing frustrated with Lynott's professional schedule, which saw him chasing fame more than music. This wasn't helped by Lynott also pursuing a solo career, which left band members wondering if they were recording for him personally, or a Thin Lizzy album.

John Sykes would join to fulfill guitar duties for Thin Lizzy's last studio album, 1983's Thunder And Lightning.  Though he continued to write, and record music, sadly, Phil Lynott would die in 1985, ending the legacy of the band. Though it was discovered he had an addiction with heroin, which ultimately contributed to his health issues. It was also discovered that he had sepsis, which some state the singer used heroine to cope with the pain of the disease. He passed away from pneumonia and heart failure due to septicemia at the age of thirty-six. 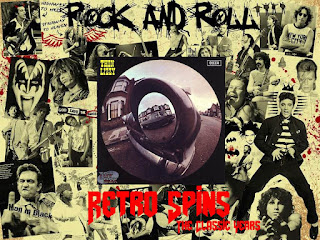 Today we go back to 1971 to dive into the classic self titled debut that failed for Thin Lizzy back in the day, but ultimately became the foundation of which the empire was built. So let's go!

As I fired it up and heard the spoken monologue, I thought to myself, "Self, is this going to be a silly concept album which hasn't aged well because it's just silly?" The response I got was from Lynott's following vocals. A resounding, "No!" I don't know what it is about his voice, but he turns any song into gold. It's just enjoyable, even if the song isn't ultimately memorable.

Were there hits to be found here? No, not by a long shot. However, even the band knew that they only had one success, and that was, The Boys Are Back In Town. Lynott even mocks this himself during a liver performance where he says, "Here is a medley of our hit...This is The Boys Are Back In Town." The point being, I wasn't expecting to hear anything that blew me away. Rather, I just wanted to witness for myself where it all started.

In that aspect, this album is very much so worth listening to. It wasn't good. It wasn't bad. It was just a point in history I wanted to hear, and in that regard, it served its purpose.