Even though the album contains what may very well be my all time favorite one hit wonder song of the era, I wasn't expecting much from Jermaine Stewart's Frantic Romantic. It's because of this the album was surprisingly not terrible.

The album wasn't Stewart's first, but it was the one in which brought him the most success and recognition with the track, We Don't Have To Take Our Clothes Off - A song which I personally never skip when I hear it start up in my shuffles. Something about it makes me stop in my tracks and have to listen to it. Like I said, it may very well be my favorite from the era.

The song debuted at number ninety in May of 1986, and from there, rocketed up to number five by August. Heavy competition from the likes of Madonna (Papa Don't Preach), Peter Cetera (Glory Of Love), Belinda Carlile (Mad About You) and Steve Winwood (Higher Love), halted its tracks, and from there it began to drop back down and off the list. This was a result of other massive hits such as Bananarama's Venus, Lionel Richie's Dancing On The Ceiling and Berlin's Take My Breath Away all fighting for the top ten space alongside the other noted tracks above. 1986 was a tough year for chart competition. 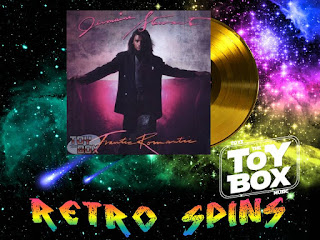 Frantic Romantic gives listeners what they want right from the start with We Don't Have To Take Our Clothes Off. However, from there it somewhat settles down and coasts a little on autopilot. Still, it's not bland for the most part. Songs such as Jody, Versatile and Moonlight Carnival stand out, and while they don't top the heights as his number five hit, they stand pretty tall on their own. It's a little disappointing these songs were never acknowledged in their own right. Jermaine Stewart showed a lot of potential on this album.

Unfortunately, it was a potential which never panned out to fruition. His 1988 and 1989 albums failed to impress nor offer chart toppers, and his career slowly began to decline. He recorded one final album in 1992, but it was never released. Stewart was later diagnosed with AIDS, and passed away in 1997 at the age of thirty-nine.

It's sad, but one can at least take that solace in the snapshot from 1986 when Jermaine Stewart was not only a chart topper, but a mainstay in radio jockey's playlists. We'll always have Frantic Romantic to look back on and listen to, and I suppose in that regard, Jermaine Stewart will live on forever.

Click "HERE" to go back to the home page. For more posts related to this one, please click the labels below.
Posted by The Toy Box on October 26, 2021
Email ThisBlogThis!Share to TwitterShare to FacebookShare to Pinterest
Labels: 1986, 80's Album Review, 80's Music, 80's Music Review, Frantic Romantic, Jermaine Stewart, Music of the 80's, Retro Spins