I would have never guess Howard Jones had so many albums if I hadn't seen the list for myself. While he contributed some major staples to the 80's, he wasn't an artist that stayed on my radar for very long. He kind of just came and went with all the other one hit wonders of the era - even though he wasn't one of them.

My experience with Jones starts and ends with Things Can Only Get Better, No One Is To Blame and my all time favorite from him, Everlasting Love. Beyond that, I didn't think he really did that much, and clearly, I was wrong. Between 1984 and 2015, the artist has released twelve albums, being one of the few 80's singers to encompass a career through the difficult 90's. I call them difficult, because they honestly were for a lot of 80's artists who just couldn't find a way to stay relevant in the grunge and despair era of music. 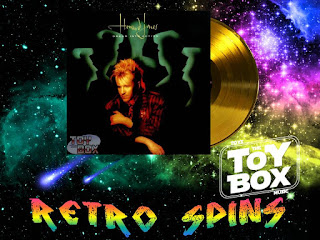 As I began to dig deeper into the singer, I thought I would start with his 1985 album, Dream Into Action. If it offered nothing else, I would still at least walk away with two of the three songs from him I knew - Things Can Only Get Better and No One Is To Blame.

It's not an awful album. I didn't find myself saying, "Wow, this song is terrible," or wanting to skip any. However, at the same time, I didn't hear anything that necessarily blew me away beyond the hits. Automatron may have come the closest in this regard. I ended up adding it to my 80's shuffle, and I'll have to see after a few more listening sessions if it will stay.

The verdict is also still out on the song Hunger For The Flesh. It was a track that intrigued me as I listened to it because it sounded really deep lyrically, and grabbed me here and there in the actual music. However, I don't know where it sits with me overall. I think in general I need to listen to this album again.

It was interesting to find the version of No One Is To Blame was released on this album with a three minute twenty-eight seconds running time, and then again on his 1986 follow up album, One To One, in a single version with a running time of four minutes thirteen seconds. It's kind of a red flag for his latter album to have to rely on his prior hit to sell copies.

Overall, Dream Into Action has a very 80's synthpop sound, and that may be what kept me intrigued to keep listening from start to finish. At the end of the day though, I'm not a fan. I'll eventually make my way into his 1989 album, Cross That Line, for the track, Everlasting Love, but I'm not chomping at the bit to get there in a hurry.

Click "HERE" to go back to the home page. For more posts related to this one, please click the labels below.
Posted by The Toy Box on October 19, 2021
Email ThisBlogThis!Share to TwitterShare to FacebookShare to Pinterest
Labels: 1985, 80's Album Review, 80's Music, 80's Music Review, Dream Into Action, Howard Jones, Music of the 80's, Retro Spins