When what you know about a band is limited to their overplayed hit, Hotel California, and a limited knowledge of the inner squabbles that led to their breaking up, it's difficult to motivate yourself to really want to dive into said group. But, today, I'm pushing myself to finally listen two and review the Eagles debut album. 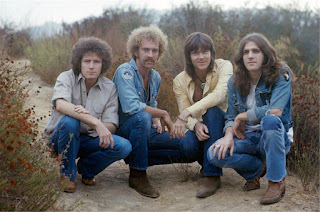 The Eagles began when musicians, Don Henley and Glenn Frey, were hired by singer Linda Ronstadt to perform as part of her band. The two began talks about forming their own group, and it was actually Ronstadt who would arrange for Bernie Leadon to perform for her, giving the opportunity for the two to approach him about forming a band with them. Ronstadt had also hired Randy Meisner for her group, and he would join the guys to form the original lineup of the Eagles. So in short, the Eagles exist because of Linda Ronstadt.

Their 1972 debut album also served as their breakthrough, with the quartet sharing writing and lead vocal responsibilities from track to track. The record received positive reviews for their harmonies, and county rock style sound, credited to producer Glyn Johns.for developing their signature sound.

For their second album, 1973's Desperado, Henley and Frey would begin collaborating more and more together, writing eight of the eleven tracks. The two would also establish themselves as the dominant leaders of the group. Something which would eventually cause problems with the remaining members. 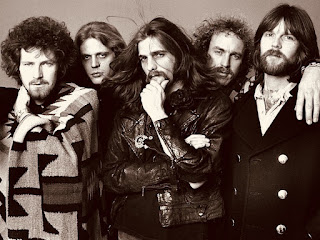 Wanting to break away from the country style music of their past two albums, the Eagles went to work on what would become 1974's On The Border. The band was looking for a harder rock sound, and with this came the inclusion of new lead guitarist, Don Felder. The guitarist was a childhood friend of Frey, and was asked to record slide guitars for the song, Good Day In Hell. The band was so impressed with his work, that the day after he recorded these portions, he was asked to join as the fifth member.

1975's One Of These Nights was the international breakthrough that the group was looking for. With it also came their first Grammy Award, for the song, Lyin' Eyes. While from the outside the Eagles had it all, on the inside, tensions were rising, and coming to a head fast. Brenie Leadon would quit after pouring a beer on Glenn Frey's head, being replaced by Joe Walsh for their subsequent album, 1976's Hotel California.

With Leadon's exit, the band adopted the harder sound it was initially looking for in 1974, parting ways from any form of country style recordings. Hotel California would become their biggest selling album to date, and propelled the already famous group into orbit. This led to a massive tour, which despite its success, ultimately resulted in Randy Meisner leaving the group abruptly in 1977. He was replaced by Timothy Schmit, and the band would go on to release their, at the time, final album, 1977's The Long Run. 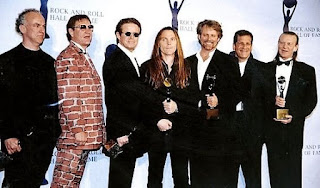 The Long Run was a difficult album for the Eagles, taking two years to record and release. Though it was initially intended to be a double album, the group couldn't write enough songs to justify a longer LP. Though it has garnered greater praise in retrospect, at the time, it was considered to be disappointing by many critics. Despite this, it went on to be a commercial success.

Though the Eagles were already on the verge of breaking up, they were contractually obligated to provide their label with another album. The end result was their 1980's Eagles Live. With their contract fulfilled, the group took a hiatus.

The members would go on to enjoy highly successful solo careers, with Don Henley and Glenn Frey rising above them as the stand out artists. Despite this, many people still had fond memories of the Eagles, and wanted to see them reunite. It was in a 1982 interview, when Frey was asked if there would ever be a reunion, that he responded, "When hell freezes over."

In 1994, the five members of The Long Run reunited, and hit the road for their Hell Freezes Over tour. However, because the band hand instituted a policy that once you left the group you couldn't come back, both Leadon and Meisner were not invited to join. Despite this, the tour was a major success, and would eventually lead to 2007's Long Road Out Of Eden. Though before this album would come to fruition, member Don Felder would be unceremoniously fired. Something he didn't take well, and fired back with a lawsuit on. The case was settled out of court. 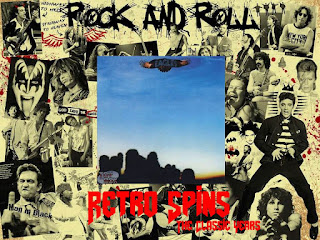 Between all of this, the seven Eagles members would take the stage at 1998's Rock And Roll Hall Of Fame to not only accept their induction, but also perform together for Take It Easy and Hotel California as a septet. It is the first and only time that happened.

Today I'm reuniting the original lineup for their 1972 debut, and diving in to what will be my first step on the journey of the Eagles. Though my goal is to ultimately goal is to listen to all of their studio albums, since I have all but their latest, I figured I may as well do it in order.

Take It Easy and Witchy Woman lead the charge on the record, and they set the tone and expectation for a solid album. It's too bad that from there everything kind of tanks. Truth be told, I kind of tuned it out.

I'm kind of feeling like I may be a snob when it comes to music. It's like I expect better from what I'm hearing from all the hype around certain bands / artists. Almost as if it's an unrealistic expectation that everything I hear is supposed to somehow blow me away.

My plan is to still go through the rest of their albums, but I have a feeling I'm going to be leaning towards to the "hits" from them as what ultimately gets added to my shuffle list. I suppose that's not a bad thing.