I think it's fair to say that while Prince is an iconic rocker from the 80's, and sure, maybe even through the 90's, he has long since become irrelevant in the music industry.  His album sales appear to have been in a steady decline since 1994's Come, and a lot of this seems to be a result of changes in his musical direction.

In the 80's, Prince was throwing a non-stop party through his music, and everyone was invited. Black, white, Mexican, Asian, Indian, it didn't matter. If you wanted to have a good time, you were invited. Then the brakes suddenly slammed, and Prince seemingly said, "Everyone out." Suddenly, he was writing music that had a feeling of exclusivity. Politically, racially, and sometimes nonsensical, his music just didn't seem to resonate with the general audience anymore. 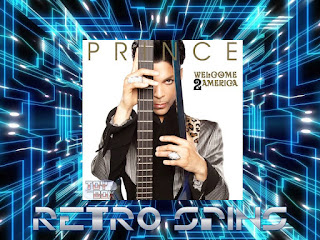 I was among them. I've long since stopped enjoying his music as a whole. Despite this, I continue to maintain a current discography for the artist formally known as a hit maker. I think a lot of this is driven by a longing to hear something that will blow me away. Transport me back to the heyday of Prince. This happens rarely, but it does happen. So because of this, I keep myself invested.

With that said, I don't necessarily get revved up to hear these albums, which is why I'm just now getting around to his July 30, 2021 posthumous album, Welcome 2 America. Even then, I think I'm more so being pushed along because of how much I enjoyed the most recent Duran Duran album, and how I'm looking forward to the forthcoming ABBA album. Basically, I need Prince checked off my "to do" list.

As I expected, or maybe because I expected, the record just didn't resonate with me. A lot of it was simply a downer to listen to. Prince had an agenda in mind, and he wants to push it. This is problematic because it misses the biggest target when it comes to music. That is that it's supposed to be entertaining. Maybe it's just me, but I don't want to be preached to by Prince for an hour about how much life sucks, and the world is a mess. I listen to music to escape that reality.

This again goes back to what I touched on above. Prince wants to use his music to stand on a soapbox, and at the end of the day, I just don't want to hear that crap. Welcome 2 America is another continuing misstep for an artist who once knew how to produce hit after hit.

With that said, I know he's with Jesus, and I don't want to make light of the fact that the world lost him far sooner than any of us ever could have expected.