Private Dancer was the album Tina Turner needed to finally break out as a solo artist. She had much success in the sixties and seventies with then husband, Ike Turner, but could never really find her own footing on her own until the album's 1984 release.

Despite how successful the album would become, it wasn't without opposition that it was recorded and released. At the time, heads from within Capitol Records were pushing against artist and repertoire man, John Carter, not wanting to sign Turner. Despite this, Carter did just that, then saw to it himself manage the album for the label. 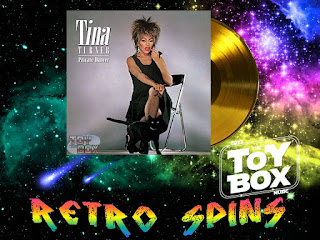 Unless you were asleep in 1984, you know this was all the right decision. Not only could you not turn on a radio in the summer of '84 without eventually hearing a chart topping track from the album, it also sold copies hand left and right, being certified platinum five times over. A hit? Most definitely.

Chart toppers from the album included, What's Love Got To Do With It, Private Dancer and Better Be Good To Me. Coincidentally, they're also my personal favorites from the record.

Despite this, I have to say the remainder of the album leaves quite a bit to be desired. I guess I don't see what's so great about it that people went so gaga over it. Don't get me wrong, the three tracks I mentioned above are fantastic, I'll even go so far as to say they're probably my ultimate favorites from Tina Turner. However, there's seven other songs on the album, and I'm sorry, but they don't deliver.

At this point, I'm not to ecstatic to hear anything else from her, which is a shame. I really wanted this album to blow me away so that I would feel the need to dive deeper into her fifty year career span of music. Right now, I have zero interest in that.

Click "HERE" to go back to the home page. For more posts related to this one, please click the labels below.
Posted by The Toy Box on July 27, 2021
Email ThisBlogThis!Share to TwitterShare to FacebookShare to Pinterest
Labels: 1984, 80's Album Review, 80's Music, 80's Music Review, Music of the 80's, Private Dancer, Retro Spins, Tina Turner