Fleetwood Mac. Though the band always consisted of Mick Fleetwood and John McVie, it would go through several iterations of singers, additional band members, and even a collaboration with Chicago, before landing on the classic lineup, which included Lindsey Buckingham, Stevie Nicks, and Christine McVie.

The formation of the group began in 1967 with original members, Peter Green, Mick Fleetwood, Jeremy Spencer, and John McVie. Together, they crafted a blues rock sound which would be the foundation for the bands early days. Danny Kirwin would join in 1969 as an additional guitarist, making his debut on Then Play On.Peter Green exited the band after releasing their second album this same year, the collaboration with Chicago entitled, Fleetwood Mac In Chicago. The reason cited for his departure was a continued decline of his mental stability, and desire to give all of the band's money to charity.

Jeremy Spencer and Danny Kirwin would share lead vocal duties on their 1970 album, Kiln House. However, following its release, Spencer would abruptly quit the group, having joined a religious cult. By 1971, the lineup was restructured, now featuring Danny Kirwin and Bob Welch sharing guitar and vocals, along with Christine McVie who also contributed vocals, while also providing keyboards, as well as John McVie and Mick Fleetwood retaining their respective roles as bassist and drummer.

This lineup too wouldn't last long. By 1973, Danny Kirwin had been fired for refusing to perform during a recent tour. He was replaced for the subsequent album, Penguins, by Bob Weston. Additionally, Dave Walker joined the band to briefly provide additional vocals and harmonica, and I do mean, briefly. He was gone by their next album, Mystery To Me, released that same year. He was asked to leave by the remaining five members because his vocal style didn't fit in with the band's musical style.

1974 saw yet another band member exit. Bob Weston was fired from the group when Mick Fleetwood discovered that he was having an affair with Fleetwood's wife, Jenny Boyd. In retrospect, this is rather hypocritical, considering Fleetwood would be the man who came between Buckingham and Nicks. Regardless, the band proceeded forward, releasing Heroes Are Hard To Find in 1974 with Bob Welch, Christine McVie, John McVie and Mick Fleetwood.

Not wanting to actually be a superstar, Bob Welch opted to leave the group shortly thereafter. His goal to travel the world and be in a, "good band" had been fulfilled, and as such, he saw no reason to remain part of Fleetwood Mac. Enter Stevie Nicks and Lindsey Buckingham for what would become the second self titled album, 1975's Fleetwood Mac.

Though Nicks and Buckingham would formally break up in 1976 as a couple, the band continued on through 1987's Tango In The Night. However, tensions were growing between the band, and after a meeting one evening at the home of McVie, Buckingham quit the band. This led to a new lineup featuring the remaining members, plus Billy Burnett and Rick Vito, both on guitars and vocals.

Due to a dispute with Mick Fleetwood over the song Silverspring, Nicks departed the band at some point after the 1990 album, Behind The Mask. A lineup change once again occurred after Rick Vito also quit to pursue a solo career. While Billy Burnette remained with the two McVie's and Fleetwood, new members, Bekka Bramlett, and Dave Mason were added. They recorded and released 1995's, Time. Christine McVie informed her band mates that this album would be her last.

Fleetwood Mac dissolved formally. However, just weeks after doing so, the classic lineup had quietly reformed. In an odd turn of events, President Bill Clinton, would have the band perform for his inauguration in 1997. From there, the classic lineup of Nicks, Buckingham, Fleetwood and both McVie's would set off on a world tour that would see major success.

The last album to date from the band was their 2003, Say You Will. Though it featured the above lineup, Christine McVie was only credited as an "additional musician". She later stated in a 2014 interview with Rolling Stone that she had developed a fear of flying, which resulted in her formally leaving the band after 1998.

Since then, the lineup has continued to tour in some form or fashion, with Christine McVie coming back in 2014, Buckingham being fired in 2018, and Nicks holding out on contributing vocals to a studio album that has been in the works since 2015 / 16. In short, drama continues among the members, and at this point, nobody knows if a new Fleetwood Mac album will ever come to light. Considering all of the members are in their seventies at this point, maybe it's best to just bow out gracefully.

Wow, that's a lot of history and drama for one band. I haven't even touched on the whole point of today's Retro Spin, which was to go all the way back to their 1968 debut album. 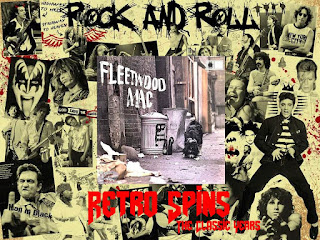 As I fired it up, I was greeted by a very different sound than I expected. Having only been acquainted with their more commercial sound from 1975 through 1987, I wasn't expected to hear a rhythm and blues rock album.

What I immediately picked up on was how unrefined it sounded. It starts out with someone in the recording booth trying desperately to get the band to focus and pay attention, and these occur throughout several other tracks, with one specifically ending abruptly as Green says something to the tune about not knowing the rest of the song. At least, I think it was Green.

Overall, it was interesting to hear, but it definitely wasn't for me. I couldn't tell you what any of the songs on the album were, because none of them stood out to me. Truthfully, I got more out of researching the above history of the band then I did from actually hearing the music from their debut. I suppose that's a fair trade off.