The Man In Black, Johnny Cash. He's the only artist I know of, to date, who released studio albums spanning six consecutive decades from 1957 to 2002. Yet forty-five years later I still only know one song, Ring Of Fire. 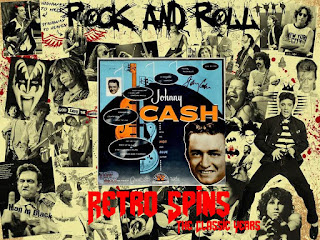 Today, I thought it would be fun to go back to Cash's studio debut album,Johnny Cash With His Hot And Blue Guitar! It felt appropriate to start there, considering my knowledge of the guy is limited.

When cash first auditioned for Sun Records in 1955 as a gospel singer, he was told to come back with a more commercial sound. That he did, returning with the songs, Hey Porter, and Cry, Cry, Cry. The latter would become his first major success, entering the country charts at number fourteen. His second single, Folsom Prison Blues, would reach the top five in 1956. The final single, Walk The Line, would become his first number one hit, but not his last.

As I played the album, a couple things happened. The first, I noticed that the songs were incredibly short. The longest track is a mere two minutes fifty one seconds, with the shortest being a minute and forty-four seconds. In total, the entire album is under thirty minutes. The second thing I noticed was that a lot of the songs sounded the same. I repeatedly found myself saying, "Didn't I just hear that song?" I hadn't.

Historically, and nostalgic wise, it was good to hear this album. However, it by no means makes me a fan of Johnny Cash, nor do I see myself wanting to hear anything more from him. If you're a music aficionado, or someone who simply appreciates the history of music, then this one is definitely worth checking out.

Disclaimer: They Toy Box does not endorse or contribute to piracy. Retro Spins posts are intended for educational and entertainment purposes only. None of the music discussed here is available for sale, downloading or distribution.
Posted by The Toy Box on July 21, 2021
Email ThisBlogThis!Share to TwitterShare to FacebookShare to Pinterest
Labels: 1957, 50's Album Review, 50's Music, 50's Music Review, Johnny Cash, Johnny Cash With His Hot And Blue Guitar, Music of the 50's, Retro Spins