Mmm. Nothing says loving like a roasted chicken on a spit, rotating over an open charcoal flame. Peruvian chicken is one of my all time favorites. Their moist birds, chalk full of delicious flavor inside and out.

Unfortunately, not many of us common folk have the ability, space and cash wise, to have a true rotisserie roaster. I don't think I'd want to either. The upkeep on them would be a beast.

However, not having the appropriate methods to truly cook a bird doesn't stop me for a moment. There are ways around it, and today, I'm gonna tell you how!

Now, silly me, I didn't think to snap any photos of things as I was prepping them, so for that, I do apologize. What I do have though are some nice mouth watering finished photos to entice you into plunging headlong into trying this yourself anyway. 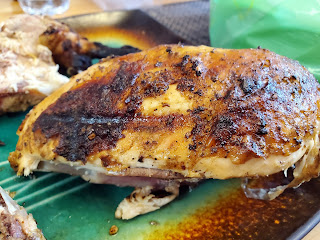 First and foremost, you gotta prep the bird. This is going to be an overnight process, so make sure you allow yourself at least one full day of marinading, starting in the morning to allow for maximum flavor.

In a large bowl, big enough to house an entire uncooked chicken, add the following ingredients together:

Give it all a good stir to incorporate everything, and let that sit for about five to ten minutes to allow all the spices to hydrate.

Rinse off your chicken, removing any innards that are hidden inside, and place it in the bowl. Use your hands to toss the bird around a few times, coating both sides. Most of the marinade will stay at the bottom of the bowl, and that's okay.

Leave the bird breast down in the bowl, and cover it with foil or wrap, and place it in the fridge. Let this sit in the fridge overnight. Come morning, the first thing you're going to want to do when you wake up is flip the bird over, recover it, and let it sit until cooking time. 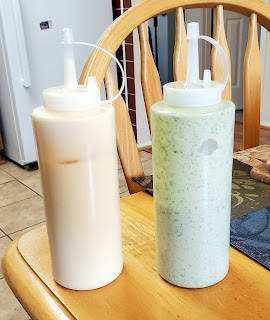 Next up, you're going to want to prep yourself some sauce. After all, Peruvian chicken is great, but even better as the vehicle for that amazing yellow and green Aji sauces. I believe they're called Aji Verde and Aji Amarillo. Now, if you wanted to make these traditionally, you'd want to seek out a bit more in depth recipe than what I'm going to share. My recipes are simple, but achieve the same flavor palate.

For the green sauce you're going to need a blender or food processor, so that's going to be your first step. It's also helpful if you buy some bottles, such as the ones I have in the photo to store your sauces in. You can find these at most grocery stores, though they are a bit more pricey than they should be. I think these cost around four dollars each.

So, with food processor in hand, or rather, plugged in and sitting on the counter, you're going to want to toss the following ingredients into it:

Turn on your food processor, and let it go for three to five minutes, liquefying everything.

The yellow sauce is not as labor inducing. You'll only need a large bowl and the following:

Stir it all together until it's incorporated.

Much like that tasty Big Mac sauce, you're going to want to let this stuff sit in the fridge for at least and hour, but the longer the better.

Based on how big your chicken is, and how long it will take to cook, you're going to plan accordingly to do so. At 350 degrees, your average chicken takes about fifteen minutes per pound. So when it's time to start, first you're going to need a shallow pan, such as a casserole dish or cake pan. Place a wire rack on top of this.

Next, put your bird on it, ensuring that it fits without hanging over the sides. You can use cooking string to secure the wings and legs to the side to ensure this is the case. Just be mindful that this may cause the bird to take a bit longer to cook in the thigh area.

During the last half hour of cooking, I made some street corn and fried yucca. I chose these sides for a couple reasons. One, they're delicious. Two, you can complete the first stage of cooking for them together.

Step one was to shuck the corn, cleaning off all the silk, and throwing it in a large pot of water. While the water is heating up on the stove, I peeled the wax skin off of the yucca, and chopped off the ends. Then I threw these in the pot as well.

Once it starts boiling, let it go for twenty minutes. By now, your chicken should also be done, so pull it out of the oven and let it sit for fifteen minutes.

After twenty minutes of boiling, and with your chicken resting, remove the yucca first, and finish prepping it by slicing it in half width wise, and then down the middle of each half length wise. Cut these halves again in half length wise, and set them aside for a moment to somewhat dry off. 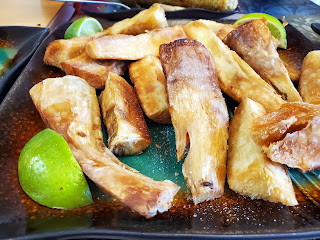 There are a couple options here for frying. One, you can pour enough oil into a large pot to deep fry (or a deep fryer if you have it) or two, use a skillet and fill it up enough to submerge at least half of the yucca slices, flipping them after about ten minutes, and repeating until golden brown. I personally use an electric skillet which allows me to choose to do either. Regardless of your method, keep your oil around 350 degrees so that the yucca gets crispy on the outside and soft(ish) in the middle. Should take about twenty to thirty minutes if flipping, and around twenty minutes if deep frying.

I pull my yucca out of the oil, and place it in a wire strainer to shake off the excess, and hit it with a little fresh ground sea salt before serving it with some sliced lime wedges.

While the oil is heating, and as you begin frying, remove your corn, and set it on a plate to somewhat dry off too. In a large bowl combine the following: 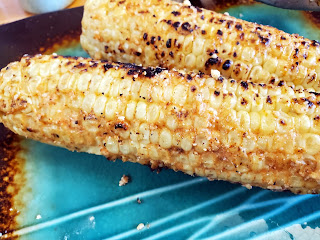 Now fire up your charcoal or gas grill, and let it get hot.

Slather up one side of the corn with your sour cream mixture, and place it "sauce" side down on your grill. While it sizzles, spread this mixture on top.

While it grills, place your fully cooked chicken on the grill, and let it sit and sizzle, locking in all that grilled flavor too.

Flip your corn over when it starts to get golden, and reapply your sour cream topping. Flip your chicken too. You're looking for not only that charcoal looking crispness, but even some grill lines.

When things are too your liking, remove everything from the grill. For your corn, reapply the sour cream mixture to both sides, and let the heat from the vegetable melt everything a bit on its own. As for your chicken, let it rest another ten minutes to seal in those juices. For serving purposes, you can either hack it into sections, like they do at the restaurants, or even get fancy and carve it. 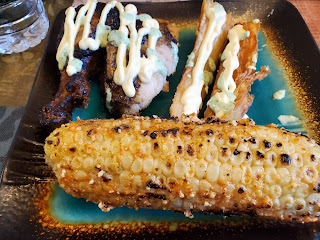 Whatever your preference, get yourself a plate, get some of that sauce action going, and dig in! 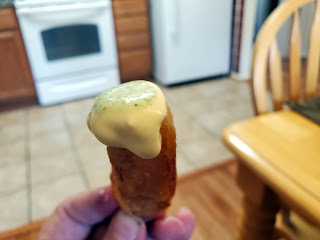