Masters Of The Universe Revelations - A (Spoiler Free) Review

After hearing nothing but bad things about Masters Of The Universe Revelations, I avoided sitting down and actually watching part one of the series. It wasn't until today that I sat myself down and said, "Okay, let's get this done and over with." 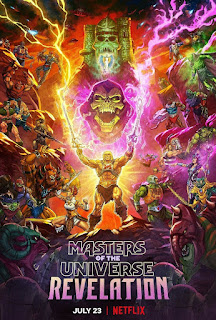 As many of the reviews have already said, the animation is spot on. It looks great, and the character design...for the most part...is good. With exception of (future) Teela, I have no complaints. As for her design, I don't personally get it. I don't know why "strong" women have to have partly shaved heads, and the physique of a man. I've never seen a woman in the real world that looks like this, so I'm not sure where "Hollywood" keeps getting this impression that this is what they look like.

The voice acting is okay, but as a fan of the original series, did take some getting used to for me. The only voice that stood out like a sore thumb was Kevin Conroy as Mer-Man. This was nowhere close to what the original character sounded like. He didn't even try. This was disappointing to me because one of the key aspects that made the character back in the day was his bubbly fish-like voice. This is nowhere to be found in Conroy's portrayal. I know that many on the internet continue to complain about other voice actors, such as Sarah Michelle Gellar's Teela, and Lena Heady's Evil-Lyn, but I thought they were okay. Like I said, the voices took some getting used to as a fan of the original series.

Story wise, I actually didn't hate the direction this series went. If you look at it from the perspective of it being a continuation of the original series, which it supposedly is, then it's relatively easy to get invested in it. Is it a perfect story? No. It has its flaws, and most of those come from Teela's character.

Teela's story is an interesting one. However, the way she is handled really makes it difficult to like her. The writer's could have still gone in the direction they were going without making her come off as a whiny brat. They took one of the most beloved characters in the franchise and made her kind of unlikable. The weight of the series somewhat falters under this.

Like I said above, it's not a perfect story, but for the most part it is enjoyable. As a fan of the original and 2002 series, I thought this was a decent entry into the MotU lore. I know the internet consensus seems to be in total disagreement with this assessment, but hey, to each his (her) own. For what it's worth, it's not bad.

Posted by The Toy Box on July 25, 2021
Email ThisBlogThis!Share to TwitterShare to FacebookShare to Pinterest