Journey had a bit of a rough start when the band first came on the scene. Lead singer Greg Rollie, lead guitarist Neal Schon, rhythm guitarist  George Tickner, bassist Ross Valory and drummer Prairie Prince recorded all the tracks that would eventually become their 1975 self titled debut album. However, by the time it was released, Aynsley Dunbar replaced Prince as the drummer. Despite this change, their debut was met with lackluster enthusiasm.

Their follow up album, 1976's Look Into The Future, would see the departure of rhythm guitars Tickner, who was not replaced by anyone. This album too failed to garner much attention. This same mild reception occurred with their 1977 album, Next.

With sales not improving on their albums, CBS Records requested the band change their musical style, and bring in a front man. It was while on tour in '77 that the group was introduced to Steve Perry, who made his live debut with the band that same year upon being hired by the band. From there, the band's earlier jamming sounds of the 70's turned into garbage, and nobody cared.

Seriously though. As we all know, under the lead of Steve Perry, Journey went on to become one of the hottest rock bands of the 70's and 80's, churning out hit after hit. Band members would continue to depart and be replaced, including Perry himself after their 1986 album, Raised On Radio, but he returned briefly in 1996 for the album Trial By Fire. The period in which Perry fronted the group remain the band's highest selling albums to date. 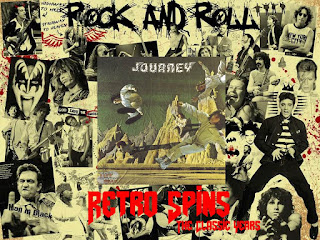 With not much love in my heart for Journey, I reluctantly fired up their debut album. I was immediately greeted by an edgy guitar hook, which was quickly taken over by a manic drum beat. I was kicked to the back of my seat with a, "Whoa! Who is this?" This was straight up classic rock.

As I listened on, I thought to myself, "What were the record execs thinking?" This was awesome! Everyone brought their "A" game, exploding with instrumental talent. It felt more like a jam session, but one that had been honed and crafted to perfection. Hearing this made me want to dive straight in to the other two albums pre-Perry (which I suppose we can just call the PP years - Is that childish?).

Hearing this album makes me understand what the guitarist for the band meant when they were talking about all the ballads, and he said something to the tune of, "What exactly is my part in this song?" Journey knows how to play their instruments, and they do this well. This is something that gets buried in the sappiness that is their PP :) years. Seriously though. It's like listening to a completely different band.