All of us children of the 80's know the tragic story of MC Hammer. Millionaire rapper turned pauper by excessive spending habits and overextending his assets far beyond what his albums were selling. But, what about the story leading up to this? Where did Stanley Kirk Burrell start his rise to the top?

Rewind to 1986. MC Hammer releases his debut album, Feel My Power on his own label, Busin' Track. Without a major label behind him, the young Burrell hits the pavement, selling copies out of the trunk of his car and basement. He catches the attention of labels when word spreads that an independent artist sells 60,000 copies of their own album without the aid of any major advertisements or promotions. 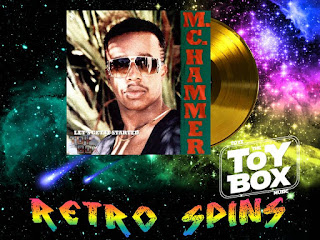 The bidding begins to start for the young artists, and though there were some rocky roads ahead, he eventually signs a deal with EMI / Capitol records and releases his second album, Let's Get It Started. In truth, the album is nothing more than a re-recording of his debut with the addition of two tracks.

Rap purists, who don't particularly like MC Hammer, may find this album to their tastes as it's geared more so to the traditional rap styles of the 80's vs. his later more dance oriented music. I guess what I'm saying is, don't knock it until you've tried it.

My favorites included, Intro: Turn This Mother Out, Let's Get It Started, Ring 'Em and They Put Me In The Mix. Coincidentally, most of these are also the tracks which pushed the album to multi-platinum status with over two million copies sold.

One of the aspects of MC Hammer I've always respected is his spiritual beliefs. He not only lets this flow into his music without fear of being shunned or persecuted for it, but also contributes to the "clean" nature of his albums. Rap doesn't have to be about violence, sex and drugs. It can just be good music and he proves it. At least in his early career - Until he ruined his image with Pumps And A Bump in 1994, and beginning the downfall of his career.

Overall, I dug the beats on Let's Get It Started, and while it wasn't his top selling album of all time, I can see why it paved the way for who MC Hammer would become in 1990 with his diamond released follow up. Like I said above, don't knock it until you've tried it.

Click "HERE" to go back to the home page. For more posts related to this one, please click the labels below.
Posted by The Toy Box on July 20, 2021
Email ThisBlogThis!Share to TwitterShare to FacebookShare to Pinterest
Labels: 1988, 80's Album Review, 80's Music, 80's Music Review, Let's Get It Started, MC Hammer, Music of the 80's, Retro Spins