Looking at the cover for Bryan Adam's Reckless, I have to say he doesn't look at all like I thought I remembered him to look. Couldn't pick this guy out of a line-up if I had to. He kind of looks like Roger from American Dad.

Mr. Adams is another one of those artists I remember dominating the radio in the 80's, but yet I never really sought out any of his albums back in the day. In fact, I pretty much forgot about him until I was in a co-worker's car one day and she was playing the cassette, So Far So Good, his compilation album.

As I was building up my collection, I know I say that a lot, Bryan Adams was someone on my list from the very beginning. So much so that I actually picked up a greatest hits So Far So Good before getting any of his studio albums. Turned out this was a good buy because it also contained the exclusive track, Please Forgive Me. However, I eventually built up my collection of 80's studio albums, which brings me to today's album, if you haven't already guessed, Reckless. 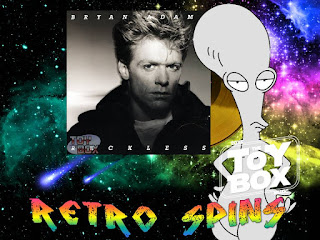 Okay, let me first say I used to hate the song Run To You is. I'm not a fan of cheaters, so when you sing a song about running around on someone, that doesn't make you a decent person in my book. Fortunately, this is saved for my by the music video where Adams portrays his guitar as his object of desire.

All time favorite, hands down, is the Tina Turner duet, It's Only Love. Bryan Adams not only shows his strength as a writer, but also his ability to shred a guitar - Or should that credit go to Keith Scott? I don't know. Either way, the song rocks.

Overall, I don't foresee myself becoming a "big" fan of Bryan Adams. Reckless was okay, but the only tracks which really stood out for me was the hits; One Night Love Affair, Run To You, Heaven, It's Only Love and Summer Of '69. The rest of the songs are kind of forgettable. That kind of stunk, considering there were five more tracks on the album.

Click "HERE" to go back to the home page. For more posts related to this one, please click the labels below.
Posted by The Toy Box on July 13, 2021
Email ThisBlogThis!Share to TwitterShare to FacebookShare to Pinterest
Labels: 1984, 80's Album Review, 80's Music, 80's Music Review, Bryan Adams, Music of the 80's, Reckless, Retro Spins