I was flipping through HBOMax earlier today, hoping that I would come across something worth spending some time watching, but not expecting anything based on past experience. That was when I stumbled across a show called, Jellystone. 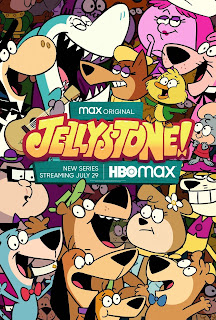 As I stared at the icon on the screen, the characters looked like retooled classic Hanna Barbara characters, but in a very unique new style. I thought to myself, "Great, another woke revision from my past. This can't be good." Yet oddly enough, I clicked the play button. As if I wanted to experience for myself just how bad it was going to be.

Episode one started up, and I was immediately turned off by the lackluster intro. Skipping this, I jumped into the first scene, immediately noticing that Augie Doggie and Jabberjaw had been gender swapped. I cringed as I waited to be lectered about how I was a terrible person for having the nerve to exist as a man in today's world.

This didn't happen though. Instead, I was whisked into a comedic spiral of randomness, and over the top humor. I was laughing so loud at the scenario unfolding around Yogi, that capitalized well on the character's fondness for eating. This humor was right up my ally.

Though Yogi serves as the primal focal point of the show, the secondary characters get a lot of their own story arcs to keep them relevant to the show, and each one is more zanier than the last. While I'm only on the third episode, I'm laughing with each one, and really enjoying myself.

So what are you waiting for? Don't be a booger in the cereal. Fire up HBOMax and jump into the show!

Posted by The Toy Box on July 30, 2021
Email ThisBlogThis!Share to TwitterShare to FacebookShare to Pinterest