So many things I didn't know in 1986. Take for example, Genesis. To me, they didn't exist until their 1986 album, Invisible Touch. I knew nothing about their history. Nothing about drummer Phil Collins who emerged to the front lines in 1975 as the new lead singer, Peter Gabriel who held the position prior to that, nor none of the other albums dating back to 1969. Heck, I didn't even know Mike + The Mechanics was related to the band via guitarist Mike Rutherford. In short, I was a noob.

Like many, my exposure began on Rick Dee's Weekly Top 40, where the song Invisible Touch began hitting the charts in May. After two months of hearing it each week, it finally reached number one on July 19th, then continued to remain on the charts through August as it slowly dropped off. It was joined by Throwing It All Away and Land of Confusion, which also bounced around the charts throughout the year.

However, this was also a period of confusion for me as I didn't understand or differentiate between Phil Collin's the solo artist or Genesis the band. It was all just one umbrella, and I don't know at this point in time which one I thought it was as a child.

Part of this was probably a result of me never owning a Phil Collins or Genesis album until recently, when beginning my CD collection. Even then, I recall it being quite a bit of research between his solo, soundtrack, duet and band related works to piece together just exactly which albums I "needed" to get to encompass the music I was looking for. One of, if not the, first albums I picked up was today's Retro Spins, Invisible Touch. 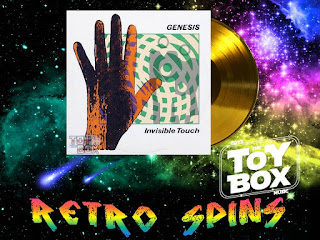 As I pretty much stated at the beginning of this post, the hits from this album were iconic staples of the 80's, and ones which lead the soundtrack of life to many a young Gen Xer's (or Xennials). Rightly so, as it's a fairly solid album.

The unfortunate side to it was, for me, the only solid tracks which I really enjoyed are the ones which not only dominated the charts, but are also available on the numerous compilation albums from the group. Invisible Touch, Tonight, Tonight, Tonight, Land Of Confusion, In Too Deep and Throwing It All Away are so solid that the remaining three songs on the album don't even merit a nod of approval.

If I had to point a finger at the track which falters the album the most, it would have to be Domino. At almost eleven minutes long, it's too lengthy for what it is. Songs of this nature typically have jam sessions in between witch catchy riffs, wailing guitars, drum interludes, etc. Domino has none of this. It's just not interesting enough to warrant being this long. It could have easily been condensed to four to five minutes, and perhaps even been better as a result. I know this line of thinking doesn't necessarily jive with the critics or Genesis aficionados, but I am neither.

Still, I don't regret my purchase of this album. To come away with so many great tracks under one jacket isn't too common when album hopping. At least not for me. I appreciate greatly what Invisible Touch contributed to the 80's, and will enjoy the tracks I pulled from it for years to come.

Click "HERE" to go back to the home page. For more posts related to this one, please click the labels below.
Posted by The Toy Box on July 06, 2021
Email ThisBlogThis!Share to TwitterShare to FacebookShare to Pinterest
Labels: 1986, 80's Album Review, 80's Music, 80's Music Review, Genesis, Invisible Touch, Music of the 80's, Retro Spins