Fan of watching television? Do you like to snuggle up on the couch in front of the tube with a plush toy? Then maybe you need the Couch Potato family. Meet Mr. Couch Potato, Mrs. Sweet Couch Potato and their two children, the Small Fry Couch Potatoes.

In 1987, Coleco introduced these four plush toys to the world, and then unceremoniously discontinued them shortly thereafter. Sure, they're not a big name license, nor did they have their own cartoon series to help sell them. But, for what it's worth, they're pretty cool. 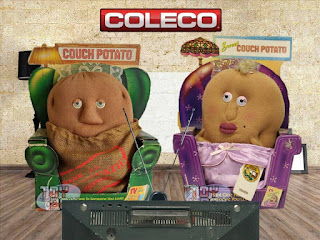 The two adult Couch Potato plush toys came in cardboard style lounge chairs, while the babies came in boxes that resembled highchairs. The downside to these designs was that they had several thin areas which are susceptible to bending and creasing. 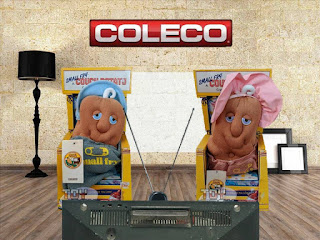 Though I'm not personally a collector of plush toys, I do appreciate unique ones such as these. They're not your average, every day stuffed toy, and that makes them pretty awesome in my book.

Click "HERE" to go back to the home page. For more posts related to this one, please click the labels below.
Posted by The Toy Box on July 19, 2021
Email ThisBlogThis!Share to TwitterShare to FacebookShare to Pinterest
Labels: 1980's, Coleco, Couch Potato, Small Fry Couch Potato, Sweet Couch Potato