I knew it was only a matter of time before I eventually swung back around to this line. Yet at the same time, I'm surprised it took this long for me to do so. I'd touched pretty close to this one in prior posts about the follow up line to the series, Future War, and the spin off, Terminator 2 3D - Battle Across Time. Ideally, while this wasn't necessarily the correct order, it's still appropriate that I would "finish" cataloging this "series" in full with the original 1991 - 1992 releases.

What you may notice, if comparing the aforementioned follow up and spin off series is that several are actually repaints of the toys featured original in this line. In hindsight, that's actually pretty disappointing for those latter figures. Cash grab? Sure. Lazy? Definitely. Still, if you're in to carded variations, I suppose you can't go wrong in that aspect.

This first series was jam packed with twelve different figures, all released over three waves. The tell of which figures are associated with which wave is the subtle changes to the cards. The first wave featured a center cut peg hole which could be punched out. The second went with the more popular "J" peg, which meant cards could be removed from pegs without having to pull each individual figure down. The final wave kept this designed, but stamped each figure with a "NEW" logo. 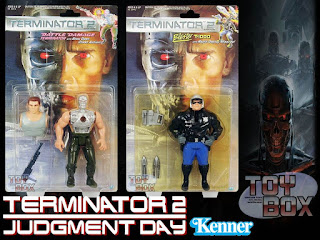 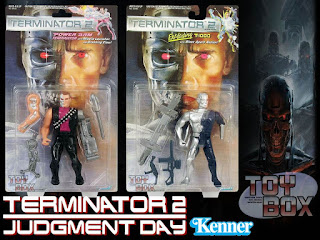 As you can see, there were a plethora of Terminator and T-1000 variations. It's a marketing decision which I feel has contributed to killing off many a toy line. Too many of the same figure with a different feature or paint job. 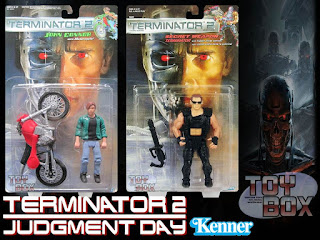 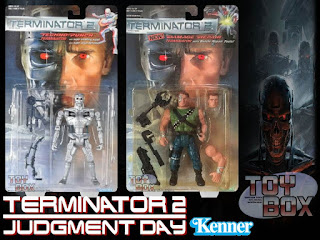 Though it's disappointing the line never really fleshed out much beyond Terminator and T-1000 variations, it was good to see John Connor was at least included. Additionally, Kenner introduced it's own character, Cyber-Grip. In general, Kenner took very liberal license with the line.

Unfortunately, Kenner never bothered with a Sarah Connor figure. Whether this was by choice or if one was planned but never approved by the actress is unknown. 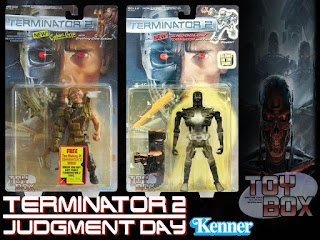 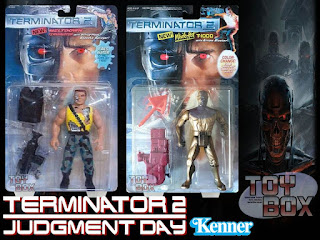 Though obviously not attributed to the film in any way, Kenner produced two vehicles to coincide with the line. The Heavy Metal Cycle could at least be construed as an attempt to incorporate a motorcycle from the infamous scene in the film where John is being chased down by a mission obsessed T-1000. However, the Mobile Assault Vehicle is so far out in left field, in terms of fitting in with the film. 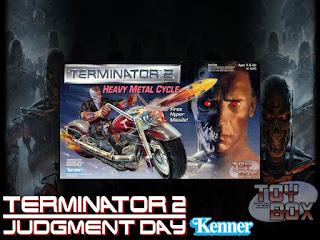 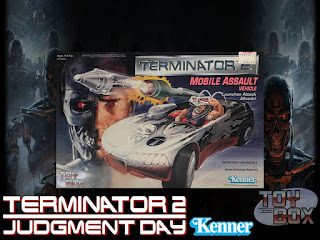 For those who wanted to make their own Terminators, the Bio-Flesh Regenerator was a pretty cool concept. It fit in nicely among the make it yourself toys of the day, such as Creepy Crawlers and Doctor Dreadful.

On a side note, if you want the film ruined for you completely, just look at the argument of how the T-1000 could have never even traveled through time, based on the rules established in the first film. 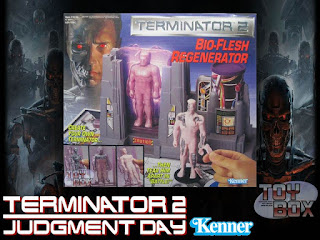 Rounding off the series was a large scale The Ultimate Terminator figure which featured light up eyes and battle sounds. Honestly, I've never really understood why toy companies make these oversized figures. They never seem to sell well. It doesn't help that they're never fleshed out to have any counterparts to even play with each other.

Seriously, what am I supposed to do with a large scale Terminator figure that doesn't have a large scale T-1000 to battle against? Toy companies never seem to think these kinds of things through. It's as if they sit around thinking, "Kids like big toys. Let's make big toys." Okay, while this is true, kids also like big toys that make sense. An individual figure, compatible with nothing else in the line makes no sense at all. 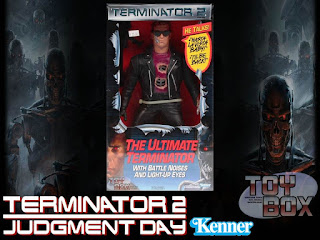 And on that note, this wraps up the Terminator 2 line from Kenner, and the entire series in general. Sorry for the long hiatus between the lines. Hopefully those of you who were interested are still hanging around to read this post.

Click "HERE" to go back to the home page. For more posts related to this one, please click the labels below.
Posted by The Toy Box on June 21, 2021
Email ThisBlogThis!Share to TwitterShare to FacebookShare to Pinterest
Labels: Kenner, Terminator 2, Terminator 2 Judgement Day