I by no means had to listen to Queen's debut album to write this post, but you best believe I did. To me, there was simply no better band out there. Considered the royalty of music by those who love them, or the most pretentious band of all time by those that don't, it seems there's two categories - You either love 'em or hate 'em, or so I am lead to believe.

One of the most disappointing things for me, as it pertains to Queen, was that I didn't get tuned into them until the Freddie Mercury Tribute Concert in 1991. At this point, lead singer Freddie, had already succumbed to his battle with HIV and AIDS, and while the world of rock 'n roll mourned a legend, my young mind was being blown away by the amount of songs I knew, but never bothered to put any effort into figuring out who sang the songs.

Yes, the bands I was big into during that era were all there, Metallica, Guns 'N Roses and Def Leppard, but among them, front and center, was the band that the show was ultimately for. I was hooked. To this day I still remember my first CD of Queen was Sheer Heart Attack, and my last, to complete my collection of their albums was, Hot Space.

Queen became a daily listen for me, quickly replacing the heavy metal sounds that were filling my speakers prior to that. I was hooked, and I wanted more and more from the band. Every time I saw a new live album or greatest hits released, I took notice, but in terms of the hits, didn't necessarily rush out to buy. To this day I pine for Queen to release more live material from the golden years, and give up chasing their current cover band iteration with Adam what his face. The proof is in the pudding that nobody wants this, with their 2020 live album with Lambert only going silver (AKA selling only 100,000 albums).

But I digress - Very angrily. 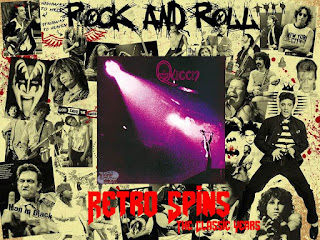 I wish I could tell you where I was, and how it felt to hear the debut self titled Queen album for the first time, but I can't. At this point in my life, I had a steady flow of their albums coming in, and not at all in the order they were released. To me, it was just another album to get my hands on. With that said, I can only imagine how amazing it would have been to pull the 1973 vinyl from it's sleeve back when it first came out and hear that amazing guitar lick of Keep Yourself Alive for the first time.

Admittedly, it's difficult for me to honestly critique any Queen album because I'm so invested in them. Even the worst of their stuff is good, and sometimes grow on me more when I listen to them. Despite this bias opinion, I will without a doubt claim that Queen, the 1973 album is pure perfection from front to back. This is not an album I skip around when playing it. I want to hear every track, in the order it was intended, and get lost in a blissful thirty-nine minute trance of the sounds.

If your only exposure to Queen has been their current iteration sans John Deacon and Freddie Mercury, first and foremost, shame on you. Second, do yourself a favor and go listen to the originals. Start with their self titled debut album, and work your way chronologically through their final posthumous, Made In Heaven. You won't be disappointed.

Disclaimer: They Toy Box does not endorse or contribute to piracy. Retro Spins posts are intended for educational and entertainment purposes only. None of the music discussed here is available for sale, downloading or distribution.
Posted by The Toy Box on June 02, 2021
Email ThisBlogThis!Share to TwitterShare to FacebookShare to Pinterest
Labels: 1973, 70's Album Review, 70's Music, 70's Music Review, Music of the 70's, Queen, Retro Spins