In the 80's, Bon Jovi was everywhere! Their break out album, Slippery When Wet dominated the number one spot for eight consecutive weeks upon its release in 1986, and fans were anxiously awaiting what the band would do next. The answer, 1988's New Jersey.

Though it wasn't as commercially successful as Slippery, it still produced a multitude of number one hits for the band, and as a whole, spent four consecutive weeks in the number one spot. Out of all of Bon Jovi's work, it also remains one of my personal favorites - Perhaps tied in first place with Slippery When Wet. 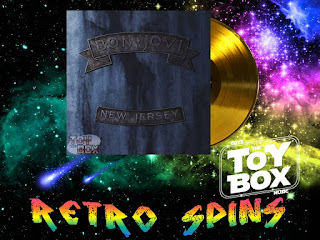 The album features iconic staples from the band, such as, Lay Your Hands On Me, Bad Medicine, Born To Be My Baby, Living In Sin and I'll Be There For You. However, the good tracks don't end with just the hits. One of my personal favorites from Bon Jovi also appears on the album, Blood On Blood.

It's when I find Bon Jovi being experimental with their sounds that I personally start to lose interest. For example, the short, Ride Cowboy Ride, a track recorded in mono, may serve as a decent intro to Stick To Your Guns. However, it also feels out of place on an otherwise hard rock album. In general, when the tracks switch to acoustic I tend to tune them out.

While one would think for how iconic the album is there would be more to say, I actually don't have much more to offer here. I've been listening to this album for three decades at this point. My opinion on it probably can't and won't change now or anytime in the foreseeable future.

It's Bon Jovi. It's one of their biggest selling albums, and it's a staple of the 80's. What more is there to really know?

Click "HERE" to go back to the home page. For more posts related to this one, please click the labels below.
Posted by The Toy Box on June 22, 2021
Email ThisBlogThis!Share to TwitterShare to FacebookShare to Pinterest
Labels: 1988, 80's Album Review, 80's Music, 80's Music Review, Bon Jovi, Music of the 80's, New Jersey, Retro Spins